Rare earth and strategic metals are one of the hottest segments of 2016. The VanEck Vectors Rare Earth Strategic Metals ETF is up more than 15% year to date, in a year when the broad markets have struggled mightily to put, much less keep, 4% gains on the board.

The market here is so hot, in fact, that my absolute favorite strategic metal is being overlooked in favor of "flashier" counterparts. Don't get me wrong, it's seen some nice gains, too, of more than 23%, but I think there's lots more upside ahead that most investors aren't seeing… yet.

That's likely because the demand picture seems like it couldn't be better… But I'm going to show you that supply is about to get impossibly tight.

Investors who wake up to the changing nature of this metal stand to make even more money on top of what has already been a double-digit run-up.

But you'll have to grab these shares quickly…

Silver has been a store of value and hedge for about as long as gold has, which is to say for thousands of years. That makes it a must-have in any market. 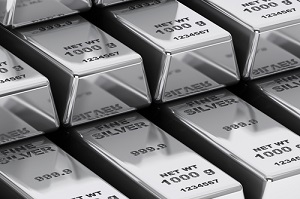 But here's the thing. Plenty of investors don't realize that silver is also an industrial/strategic metal. It's used in just about every electronic device in the world, and there are just no good substitutes. It has to be silver.

It's an excellent electrical and thermal conductor; it provides a durable and smooth coating for many tech components that can't have imperfections; and it has anti-microbial properties that help medical devices stay germ-free.

Consider this: According to the Indium Corporation's blog, there's about 22,000 metric tons of this metal produced each year. The U.S. Geological Survey says that 35% of that, around 7,700 metric tons, is used in electronics, another 25% used for investment-grade coins and bullion.

Every solar panel, storage device, tablet, smartphone, connected car, and HD TV that exists or ever will exist needs silver. And lots of it.

What's more, you'll find it in antibiotics, water purification systems, and even NASA spacecraft.
Washing machines, refrigerators, air conditioners, air purifiers, and vacuum cleaners all rely upon silver nanoparticles to sterilize up to 650 types of bacteria.

It's versatile, but it's very hard to mine, which is why it sells for $16 an ounce. That works out to be $256 for every pound. Even though silver prices have fallen sharply from the peak of the commodity boom, low-cost silver miners can still make ample profits from every ounce they produce precisely because demand is growing and supply is tightening.

For instance, according to Prismark consultants, the photovoltaic panel industry's demand for silver has grown 50% since 2012. And touchscreen production is running at a CAGR of 20% through next year.

So physical silver is without a doubt a very smart investment right now, but owning silver producers looks even better.

Let me show you one of the best in the world.

Own Silver Stocks for the Maximum Possible Gains

Mexico-based First Majestic Silver (NYSE: AG) is one of the best-positioned, most profitable miners there is.

The company has six productive silver mines in Mexico, the world's largest source of silver. And it's preparing to meet surging demand with two advanced projects it's developing, as well.

It produces around 94 metric tons of silver every quarter at this point, or about 3 million ounces, and production is climbing.

What's more, it's helmed by one of the smartest minds in the business: CEO Keith Neumeyer.

I've followed Neumeyer's remarkable mining career for close to 40 years now, and I've every reason to believe his best, most profitable years are ahead of him, thanks to First Majestic's position in the market.

"Silver is used in virtually everything we do – even when we're sleeping. Most of the electronics in households have silver in them. Our automobiles, our telephone systems, our computer systems, windows, and light bulbs.  Silver is used everywhere.

You know it's hard for people to really realize the (broad) use of silver because it's in such small quantities. You know, a cell phone, for example, has only a couple of dollars' worth of silver in it. But you have to multiply that by hundreds of millions of cell phones."

As I mentioned earlier, solar power in particular is set to further drive silver's use. Neumeyer says it takes roughly 3 million ounces of silver, or about how much he pulls out of the Earth every quarter, to produce one gigawatt of solar power. In turn, one gigawatt of power can provide enough energy for about 700,000 homes.

Over the next several years, China intends to produce around 70 gigawatts of power from solar panels. Just that one country alone would consume 210 million ounces of silver to derive energy from the sun.

Let me be clear: We're talking demand that is roughly 78% more than China's total silver output last year. And China ranks as the world's third-largest silver producer after Mexico and Peru. That means growing demand from outside of China, since it will not be able to supply the silver needed to meet its solar industry's needs.

Turns out, 90% of all the silver that's ever been mined is gone for good.

Silver was recently trading at $20 an ounce. Neumeyer told me that for it to become efficient to recycle silver, the price would have to rise to somewhere around $150 an ounce.

That may happen eventually, but not anytime soon.

Why First Majestic Is the Perfect Company for This Metal Market

Neumeyer's firm is operating in an extremely favorable demand environment, but its native business climate couldn't be better. Its operations and workforce are largely based in Mexico, so investors can be assured there's little regulatory interference from the government. In fact, the Mexican government is a huge fan of the company; it provides 4,000 jobs and has in fact won social responsibility awards from Mexico's Center for Philanthropy for seven years running.

First Majestic turned in a strong performance last quarter. You see, earnings expectations were flat, literally, at $0.00. But the company knocked it out of the park when it came in at $0.03 – a very attractive beat.

It reinforces everything that I'm seeing and everything that Neumeyer told me. In 2011, silver was at $35 an ounce. Now it's at $16. Cash flow is up, working capital is up significantly. These are very bullish signs.

The stock is up nearly 250% year to date, but this is the beginning of its run. What happens in the global economy in the meantime is, frankly, irrelevant. Recession or not, there's no stopping the massive tide of billions of soon-to-be indispensable high-tech electronics about to hit the market. First Majestic is the single best way to ride that wave of demand.

Ever Held $37 Trillion in the Palm of Your Hand? Right now, the race is on for a projected $37 trillion fortune. Incredibly, the key to this fortune is hidden in a little black box small enough to hold in the palm of your hand. And as luck would have it, we've determined that there are as many as 232 of these little black boxes hidden in your local zip code. Get there fast and claim your share. But time is of the essence. Go here now for details…