It's the question on everyone's mind…

Brexit: "What happens next?"

The exact details of how the United Kingdom's unprecedented vote to leave the European Union will play out in real-time are little-reported on, only that its exit will unfold into a multiyear battle.

You see, in the EU's 60-year history, a member state had never actually opted to leave before Britain's June 23 referendum. So there is no clear outline for how the union's third most-populous country and second-largest economy will withdraw.

Here's what we do know…

Prime Minister David Cameron announced last Friday that he will resign within the next three months. The Conservative Party committee in charge of overseeing the leadership process said it intends to choose a new PM by Sept. 2, 2016. [Editor's Note: Get our top three predictions on who will be the next British PM after David Cameron here.]

Upon news of his resignation, Cameron stated it should be up to this new successor to decide when to activate Article 50. Article 50 is the provision in the 2007 Treaty of Lisbon that set out regulations for bloc members wishing to exit.

Once the UK invokes this provision, it will have a two-year timetable to reach an exit deal.

But there's a problem with Article 50: It was deliberately designed to be vague, wrote The Mirror earlier today. This means member states trying to exit could be forced to enter into longer negotiations to hash out a strategy.

INFOGRAPHIC: A Look at What Lies Ahead 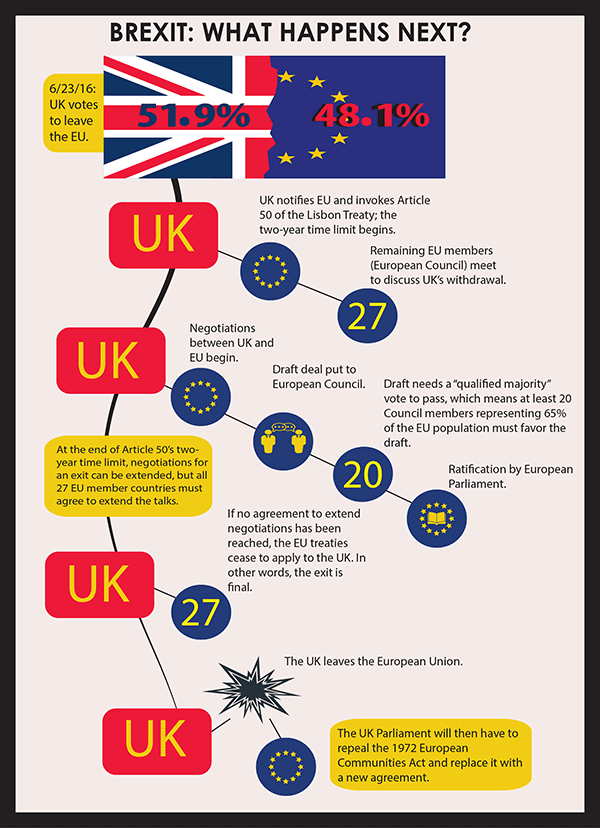 Pop Quiz: Can you name every member of the EU off the top of your head? It's not an easy task – there are 28 countries in the bloc, and another 17 members of the Eurozone within the EU. Here's a look at the 28 member countries, plus their GDP as of 2013.