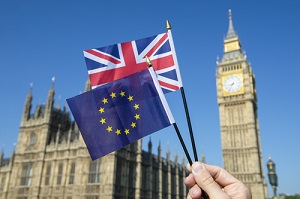 Dow Jones Industrial Average News, 6/29/2016:  The markets have shown some ease in the last two days after a brutal post-Brexit sell-off that saw roughly $3 trillion wiped out in two days.

The technology and banking sectors, the two hardest hit since news of the vote, are showing signs of life. Despite the optimism, it is largely based on expectations that central banks around the globe plan to loosen monetary policy and increase stimulus efforts in order to reduce uncertainty in the markets.

You can find those answers in today's top stock market news, stocks to watch, ways to profit, and economic calendar for June 29, 2016.

Dow Jones futures projected a 104-point gain as investors' nerves eased over last Thursday's vote that saw British citizens choose to depart the European Union. Despite the gains, investors have little expectation that the U.S. Federal Reserve will hike interest rates again in 2016. In fact, the probability of a rate hike in December is below 20%, a stark turnaround from lofty levels just a few weeks ago. Our Chief Investment Strategist Keith Fitz-Gerald shares his insight on the Brexit: What to watch, who to buy, and where to profit.

Investors are willing to look past the news that Standard & Poor's and Fitch Ratings both slashed the credit ratings of the United Kingdom and that many different downgrades rattled investment banks and commercial banks across England. Still, investors are looking to safety as gold prices push higher. The yellow metal was up 0.3%, while silver prices were up 2.5%.

Crude oil prices pushed higher again on Wednesday as concerns about the Brexit continue to subside. Meanwhile, supply is under pressure as Norwegian oil workers continue a strike that is shutting down fields in Western Europe's key production points. WTI crude was up 0.8% this morning, while Brent crude was up 0.7%. You can find out more about how Brexit just killed London as the energy capital of the world right here.

In other energy news, shares of Energy Transfer Equity LP (NYSE: ETE) were up marginally after the company called off its $33 billion merger agreement with Williams Co. Inc. (NYSE: WMB). The latter company is likely to appeal a ruling by a judge that said that the end of the deal was legal due to tax considerations.