The white metal currently sits near a 21-month high of $18.55 an ounce, and our silver price prediction shows more gains ahead in 2016.

And there are four reasons why we see silver prices reaching $20 an ounce by the end of the year.

First, here's what's been driving the price of silver higher in 2016...

Silver Price Prediction: Why Prices Are Up 35% Year to Date 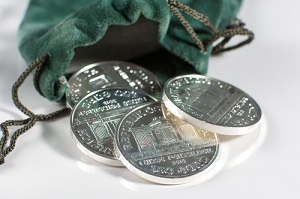 The three biggest boons for the price of silver earlier this year were stock market volatility, a slowdown in China, and the use of negative interest rates. The "lower for longer" interest rate stance from the U.S. Federal Reserve also boosted silver prices.

But the most recent event that pushed prices higher was the Brexit.

On June 23, the UK voted to leave the European Union. The decision caused markets around the world to crash and boosted the silver price to a two-month high.

Legendary investor George Soros, who made some dramatic comments ahead of the Brexit vote, followed up today (Thursday, June 30) with some equally startling words of warning.

Speaking to the European Parliament in Brussels, Soros said Britain's decision to leave the EU has "unleashed" a global financial crisis similar to 2007 and 2008. He said the crisis has been slowly unfolding but the Brexit is the catalyst that will speed it up.

The price of silver will remain high as markets deal with the resulting economic and political uncertainty. Investors looking for clarity won't find it anytime soon because the UK won't officially leave the EU until 2018 at the earliest.

In his 2016 silver price prediction, Money Morning Resource Investing Specialist Peter Krauth expects the metal to back off in the short term as markets calm down.

Still, Krauth remains bullish and sees potential for stronger silver prices this year thanks to these four trends...

Silver Price Prediction Factor No. 1, The Fed: A rate hike at the upcoming July FOMC meeting is completely off the table. In fact, any raise in interest rates from Janet Yellen and company looks extremely unlikely this year in the wake of the Brexit. Traders and investors are actually starting to price in the chance that the Fed will cut rates this year rather than raise them. According to CME Group's FedWatch, they place the odds of a rate hike before 2018 at 50%. A full rate hike isn't expected until the final quarter of 2018.

Silver Price Prediction Factor No. 2, Supply: Global silver production is set to fall this year for the first time since 2011. According to CPM Group, yearly silver output around the world will decline by 2.4% to under 785 million ounces by the end of 2016.

Silver Price Prediction Factor No. 3, Industrial Demand: Silver is used in everything from manufacturing to medical services. Its biggest role is in the production of PV cell solar panels. Each panel uses a minimum of 20 grams of silver. GTM Research reports the U.S. solar industry will grow a massive 119% in 2016. The metal's industrial use alone will increase demand by about 70 million ounces by the end of the year.

Silver Price Prediction Factor No. 4, Sales of Silver Eagle Coins: Sales of the U.S. Mint's Silver Eagle 1-ounce coins are rising at a rapid pace. Roughly 4.5 million coins were sold in May, which makes it the best month of May in 30 years. From January to May, coin sales reached 23.4 million - up 38% year over year.

All of these trends factor into Krauth's prediction for silver prices, which he sees hitting $20 by the end of 2016.

Wall Street's Next Wipeout -- Will You Be Ready? A Wall Street analyst reveals a little-known "crash insurance" strategy that could "insure" your assets - up to $1 million or more - with the potential to keep you fully covered before the Brexit sends the unprotected to the poorhouse. Read more...

Rate of silver next week