One of the credit bulls' most infamous (and, unfortunately, popular) lies is that "Corporate America is flush with cash." This is dangerously misleading.

It is true that a small number of companies, primarily tech giants, do have large, healthy cash hoards, but the average U.S. corporation is not only not rich, but is in fact indebted to a horrifying degree – more so than before the financial crisis.

In fact, right now, just 50 companies – the top 1% of all U.S. corporations ­- control half the cash on the S&P 500. The other 99% of companies are in terrible shape, leveraged to the gunwales. They are toxic and liable to default.

That's bad news for buy-and-hold investors, and even worse for bondholders, but I'm going to show you how to make a killing on the best debt out there…

The "Dark Side" of the Balance Sheet Is Frightening

Relying on the excellent analytical work of Société Générale SA's (OTCMKTS ADR: SCGLY) Andrew Lapthorne, I warned about this situation starting in mid-2014.

You see, it wasn't just the world's central banks that decided to solve a debt problem with more debt.

U.S. corporations have been partying like it's 1999 when it comes to borrowing cheap money courtesy of the feckless Fed, and the result is an overleveraged and unproductive corporate sector whose riches are narrowly shared by a small percentage of companies, while the vast majority of Corporate America is being slowly suffocated by too much debt that it can never repay. 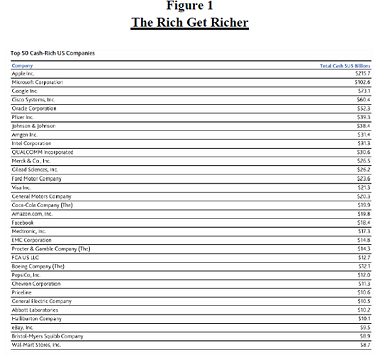 But the other side of the balance sheet told a different story.

In layman's terms, corporations are much more highly leveraged today than on the cusp of the financial crisis. Corporations have been able to get away with it because interest rates are much lower today than a decade ago.

This reveals a few illuminating things….

As noted above, this data is consistent with the work of Société Générale's Andrew Lapthorne, who has warned for over two years that U.S. non-financial companies have at least 40% more net and total debt than in 2007. Goldman Sachs has also confirmed these figures.

High debt levels are disguised by low interest rates, but remain high nonetheless. At some point, all of this debt has to be repaid or it will default, and defaults are indeed starting to increase significantly (primarily, though not exclusively, in the oil patch).

Standard & Poor's claims that total corporate debt increased by $2.8 trillion over the last five years, while corporate cash rose by only $600 billion.

These numbers are never mentioned by the folks touting high-yield bonds as a great investment in the financial media, but they are important.

The high-yield market is going to see a lot more defaults as the "zombie companies," Corporate America's walking dead, who are operating now but entirely unable to refinance their debt, end up going bust in the next two to three years.

Don't be caught holding these companies or their bonds when they do finally fall.

Defaults Are Going to Be Horrifically High

This snapshot of an increasingly indebted corporate sector dovetails with other troubling trends that suggest that economic growth will continue to struggle unless the incentive structures for corporate behavior are drastically altered (which requires tax reform and fiscal policy initiatives).

At the Mauldin Strategist Investment Conference in Dallas in May, David Rosenberg reiterated a point he has made for a while, that capital spending is running far below what is necessary to sustain economic growth.

This is consistent with research done by Lacy Hunt and Van Hoisington showing that only a small percentage of corporate borrowing is spent on productive activities such as capex and research and development (R&D).

For example in 2015, corporations spend less than $100 billion of the nearly $800 billion of money they borrowed on capex and R&D. Instead, they devoted the majority of their expenditures – and the money borrowed to fund them – to stock buybacks, dividend increases, and mergers and acquisitions (M&A), leaving them with less productive, more leveraged, and more goodwill-laden balance sheets.

In other words, they borrowed more money without improving their ability to service or repay it. Financial engineering dominates corporate activity, resulting in an over-indebted and unproductive economy that is more susceptible to shocks.

The average yield on the energy sector of the index dropped from over 17% in February to 9.82% on May 30 as well, but this is deceptive because the 70+ companies that defaulted since oil prices collapsed dropped out of the index.

Speaking generally (which is all you can do in evaluating broad-based investments in high-yield bonds through ETFs and mutual funds and similar vehicles), a 7.3% yield on a high-yield bond or 9.8% yield on an energy bond in this environment is woefully inadequate to compensate investors for the risks involved in owning them.

The writing on the wall couldn't be much clearer.

As You Exit High-Yield, Grab These Shares

The jump in the default rate is in its early innings and whatever gains were enjoyed since February are likely finished as more companies default over the next two to three years.

I continue to believe that Marty Fridson's default forecast of $1.6 trillion of aggregate global corporate bond defaults between 2016-19 is reasonable based on a normal default cycle; if we have a recession or a financial crisis, the number will be much worse.

There are many "zombie companies" across a broad swathe of industries (not just commodities but retail, for example) that are only hanging on because of low interest rates and the willingness of their private equity sponsors to milk them for fees rather than restructure their debts now in order to give the businesses the debt relief and capital necessary to grow (or survive).

As a result, the damage in the corporate sector is likely to be worse than in 2008. If you own high-yield bonds, and especially if you own high-yield ETFs and mutual funds, get out while you can. The people promoting these toxic products do not have your best interests in mind.

As Standard & Poor's points out, "In an economy where the top 1% of companies controls over half of the cash, analyzing the U.S. corporate credit market can no longer be done on a holistic basis, or even on an investment-grade versus speculative-grade basis."

In other words, investors need to do their homework and be very selective in the bonds they buy. The ETF view of the markets doesn't come close to telling the real story of what's going on; it's also a great way to lose money.

However, I do think that the fallen angel space (fallen angels are bonds that lose their investment-grade ratings) looks attractive.

On a risk-adjusted basis, fallen angel bonds tend to produce very attractive returns. They rarely default (except in cases of fraud or extreme changes in conditions like the current commodity collapse) and tend to be large companies with significant resources to ride out storms.

The wave of defaults about to hit the market is likely to decimate high-yield and ripple out across the entire stock market. That makes right now the best time to own gold. Money Morning is currently recommending a direct ownership opportunity – the ultimate "insider's" gold play – with the real potential to hand you as much as $595,000 for every stake you take. The details are here…