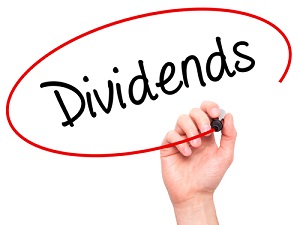 Today we're bringing you the top three dividend stocks to buy on the market.

More than 400 of the companies in the S&P 500 pay dividends to their shareholders. But they don't all offer quality stocks to buy...

That's why we've picked the top three dividend stocks to buy to buy now. They offer investors the most reliable dividend income on the markets. Each of these three stocks have a history of consecutive, yearly dividend hikes. They also rarely miss dividend payouts.

And that's important, because any time the markets go south, investors lean on dividends for stable returns...

The S&P 500 lost 50% of its value and the Dow Jones Industrial Average tanked 20% from its October high of 14,015. Investors were selling like crazy. It took years for the markets to fully recover.

But some parts of the market bounced back faster than others...

Over three years, dividends were able to recoup the S&P 500's 21% decline from 2009, according to Morningstar Director of Equity-Income Strategy Josh Peters. Compare that to the nearly five years it took for the broader markets to fully recover.

And two of our top three dividend stocks to buy now even raised their dividends during this time period.

But beyond just being smart insurance when times are bad, dividends also grant you reinvestment opportunities.

Yes, you'd be a millionaire.

As you can see, dividends are one of the best ways to build your wealth or reach your retirement goals. In today's economy, it's hard to squeeze returns from other forms of passive income - like savings accounts, money market funds, or U.S. Treasury bonds. The U.S. Federal Reserve has kept interest rates so low, you're not getting much back from your bank deposits or fixed-income investments.

Our top three dividend stocks pay out far more on average than you'd get from those financial instruments. For example, our stock picks have far higher annual dividend yields than the one-year U.S. Treasury bond.

We'll talk about these dividend stocks in just a moment. But one last thing first...

It's important to keep in mind: Just because a stock has a high dividend yield, that doesn't necessarily mean it's a good investment.

Some dividend investors are drawn to stocks with higher dividend yields. Sure, who wouldn't be enticed by a stock with a 5% dividend yield or greater at first look?

But there's a reason many of these companies have such high yields...

Some are desperately trying to fund their operations or growth. They use their high dividend yield to attract income investors. But the investors get the worse end of the deal...

These companies can choose to suddenly not pay dividends to their investors if their earnings drop.

Take Potash Corp. (NYSE: POT), for example. The Canadian agricultural chemical company has been beaten down by its competitors who are engaging in price wars. The stock is down 48% year over year, but has hiked its dividend to $1.00. Potash stock currently has a dividend yield of 5.8%, even though its projected earnings per share for this fiscal year are $1.00. The company won't likely be able to pay out its dividend in full this year.

You won't have to worry about this risk with our top three dividend stocks to buy. They have reasonably high yields and almost never miss dividend payments.

Let's check out these three dividend stocks to buy now...

Proctor & Gamble has had 179 years of outstanding success and shares its achievements with its shareholders.

P&G operates under five different segments: beauty, grooming, healthcare, fabric care, and home care. Its fabric segment is the largest and accounts for 32% of its net sales and 25% of its earnings.

It is one of only 17 companies that have raised their dividends consecutively over 50 years, according to suredividend.com. The consumer goods company logged its 60th consecutive dividend hike in 2016.

One of the most attractive qualities about PG stock is that the company returns nearly 100% of its profits to its shareholders through dividends and buybacks.

Analysts expect the company to have earnings growth of 7.6% for the next five years. Along with its 3% dividend yield, this gives Proctor & Gamble an expected total return of over 10% a year. That's a great payout for long-term investors. And it's also about 1% higher than other companies in the consumer goods sector.

P&G's success comes from its diversified brands of necessity goods. Many of the products that Proctor & Gamble sells people simply can't live without. That has fueled the company's tremendous growth over the years.

Another challenge for P&G's revenue growth is its restructuring. The company has taken steps to refocus on its core brands and has had several CEO turnovers over the past 10 years.

But even with its current challenges, PG stock still a strong investment because of the nature of its business. People can't live without its products. And the company's big dividend is enough to satisfy investors until the company can boost its revenue growth.

Founded in 1898, Pepsi is a food and beverage company that serves over 200 countries and territories. Its $140 billion market cap puts it right behind The Coca-Cola Co. (NYSE: KO) as the second most-valuable beverage company in the world.

Pepsi was chosen over Coca-Cola (although it also has a great dividend) because of its diversified brands.

The company has 22 brands worth billions, including: Lay's, Quaker, Cheetos, and of course - its flagship, Pepsi-Cola. Unlike Coca-Cola, Pepsi's products are in both the food and beverage categories.

Pepsi has increased its dividend for 43 consecutive years. This is not only a testament to Pepsi's sound growth, but also of its commitment to its shareholders.

The company currently pays out a quarterly dividend of $0.75 per share of its common stock. And with shares priced at $100 as of May 23, Pepsi currently has a dividend yield of 3%. That's a great yield for such a large, blue-chip stock. And it's also 0.46% higher on average than other companies in the consumer goods sector.

Over the past 10 years, Pepsi has returned nearly $60 billion to shareholders from dividends and share buybacks. Given Pepsi's dividend history, readers can expect the company to continue raising its dividend in the future (look for one in 2016, too).

So far this year, Pepsi stock has outperformed the S&P 500 by an average of 2%. And the stock was fairly stable during the market downturn from January to mid-February. During this time, Pepsi stock was trading down no more than $13 from its 52-week high, at $106.

Pepsi has a big price target because analysts are giving the company a lot of room for growth. They expect Pepsi to have about 3.1% sales growth by next year, which is a 3.5% increase from the current year, at -0.40%.

As one of the most stable stocks on the market, Johnson & Johnson has a dividend built for risk-averse investors.

J&J is a multinational medical device, pharmaceuticals, and consumer goods company. It operates under three segments that closely match this description.

JNJ stock is one of the most stable stocks on the market. In fact, its stock price has had one of the lowest standard deviations of any blue-chip company over the past decade. This makes its dividend yield of 2.8% perfect for income investors looking to avoid risk. Its yield is also about 1.19% higher than the average yield of other companies in the healthcare sector.

And with 54 years of consecutive dividend increases, it's unlikely that the company will stop its dividend hikes any time soon. Already this year, it's raised its dividend 6.7% from $0.75 to $0.80.

With an average EPS growth of about 6% for the past decade, expect J&J stock to give you returns of nearly 9% per year.

Another thing to consider: In 2016, the healthcare sector is expected to grow 10.7%, according to a report from S&P Global Market Intelligence. That outpaces the projected growth of the S&P 500 by about 3%.

Johnson & Johnson will be one of the primary beneficiaries of this growth. Consider that its medical devices segment makes up 85% of sales from products with No. 1 or No. 2 market share position, according to suredividend.com. That means J&J will be making big profits from its key drugs like Zytiga (for prostate cancer) and Remicade (for Crohn's disease), which generate billions in revenue.

J&J's sales across all of its divisions are also expected to increase by 4.6% by December 2017.

Your Retirement Is Being Threatened: Puerto Rico's debt crisis could have a direct impact on your retirement fund - even if you don't personally own Puerto Rico bonds. Read more...