I've known Tim Puko, a journalist, for more than 20 years. He now writes on energy matters for The Wall Street Journal, but when we first started comparing notes all those years ago, he was cutting his reporting teeth in Pittsburgh.

One of the ongoing issues we continue to discuss is how reliable the big banks are when it comes to "assessing" the genuine market value of crude oil and natural gas.

When well-known institutions like Goldman Sachs and Morgan Stanley run large short plays on oil (which are profitable when oil prices fall), reports from either bank claiming that prices are going to tank hardly have an objective ring to them.

That's the opposite of what they were saying just a few weeks ago.

Here's why they changed their minds... and why you can never trust their "forecasts"... 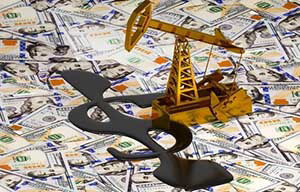 Only a few weeks ago, for example, Goldman was again calling for a dive in crude oil prices. And while this one was not forecast to be all the way down to $20 a barrel (their earlier position), it was a refrain that sounded all too familiar.

When that has happened in the past, I have always taken a more sanguine view.

After all, Goldman has often taken the heaviest short position among the major players and, to the extent that the bank's overly pessimistic forecasts were believed, Goldman made money.

In other words, Chicken Little yells "the sky is falling," rattles the market, and whistles all the way to the bank.

One would expect this to be happening again in the wake of Brexit - the British decision to exit the European Union. After all, as of the close in oil trade Monday at 2:30 p.m. Eastern, WTI (West Texas Intermediate, the benchmark for crude oil futures contracts in New York) had declined 7.5% in the two trading sessions following the dramatic Brexit vote.

But despite these falling oil prices, this time around the big boys of international banking are singing a different tune... even in the face of a strengthening dollar.

You'd expect the opposite - since most oil trades are denominated in U.S. dollars, a rise in the dollar's exchange value makes oil cost more in other currencies, which tends to lower oil prices.

Brexit's Main Effects Won't Be Visible for Some Time

As Tim puts it in his article, the banks are: saying the worst may be nearly over for oil. Last week's surprise UK vote to leave the European Union has raised risks but ultimately does little to dent the trends of rising demand and falling supply that have been pushing oil on its strongest rally in years, the banks said.

Even if spillover effects from the vote slowed major economies around the world, it would likely reduce oil demand by just 130,000 barrels, or 0.1% of global demand, Goldman analysts wrote in a note published Friday and sent to reporters Monday. Deutsche Bank had estimated an even smaller impact, just 100,000 fewer barrels, compared with outages in Nigeria that are taking 400,000 barrels a day off the market.

"The impact on industrial commodity fundamentals of a leave vote is extremely small from the demand side," Goldman said. "On the supply side, a stronger dollar would lower the cost of production which has likely been priced into markets with (Friday's) sell-off."

Yes, the uncertainty of what the UK move actually means in longer-term market impact is going to guarantee bouts with volatility. And then there are the "chimeras" now being waved about.

Each of these will take some time to reveal itself. There may be an effect on markets generally from such matters, but hardly at this point. Initially, put simply, much of the hype about Brexit fallout is speculative and quite premature. This is going to be a messy, loud, and rancorous divorce settlement between the Brits and the rest of Europe.

But it will also be a drawn out over several years.

Nonetheless, against this backdrop, the normal big bank penchant to drive prices down is noticeably absent. Instead, all five of them are pointing in the opposite direction.

Banks Have Their Own Reasons for Making Oil Look Good

Now, Tim and I have our own take on why this is, one that addresses the position the banks find themselves in at the moment more than any concerted analysis of the market. And in his article, Tim mentioned that some fund managers are now beginning to come around.

You see, the banks have extended hefty credit lines to U.S.-based oil companies, and those companies are currently underwater as the debt situation worsens and oil prices linger. The banks' sudden move to support higher oil prices may prove to be little else than an attempt to support the oil companies they are so exposed to.

And in the process, boost the oil revenue essential to the banks getting paid back.

Of course, by the time you read this, half a dozen new "good reasons" may have been coined to conclude the same thing - oil prices are going up, no matter what.

But make no mistake.

These days, as before, a big bank's internal profit interests may well trump any "objective" estimate of where oil is going.

The only thing different this time around is what those profit interests are.

Brexit "Killed" the Energy Capital of the World: Brexit has done potentially fatal damage to London's status as the world's energy capital. And the short-term consequences will give way to a long-term restructuring in the energy market that'll extend far beyond Europe's borders...

Crude Oil prices have not shown signs of going away any time soon. CQP is my most liked petro stocks.

E = mc 2: Go figure. Theory of Relativity. It also means: Where two or three are
gathered in my name, there I am in the midst of them.