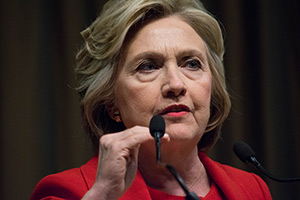 Though the topic of Comey's speech hasn't been officially announced, various media sources are suggesting he'll reveal whether or not the FBI will officially seek an indictment following the Clinton email probe.

You see, this past Saturday, federal investigators questioned Clinton about her use of a private email server for about three-and-a-half hours. They followed that up with interviews with her former senior aides as well, reported The New York Post this morning.

But sources familiar with the investigation told CNN on July 2 that, within the next week or so, there will likely be an announcement that no charges will be brought against Clinton… so long as new evidence wasn't presented during her interview over the weekend.

Guess we'll find out in about an hour…

Bolling for America: In his new book, "Wake Up America," FOX News host Eric Bolling makes some bold predictions about the changes America would endure under a President Hillary Clinton. Here's a look at what he thinks will happen, including why free speech will be banned on colleges campuses….