Today's drop leaves the Tesla stock price down 18% in the last three months. And while many investors are panic selling today, this recent pullback is actually a great buying opportunity for long-term investors. 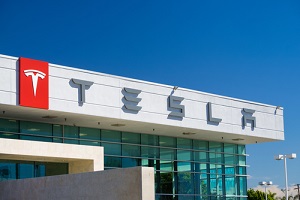 According to data released by Tesla on Monday, the total number of vehicles shipped by the company in Q2 2016 was 14,370. That was 450 fewer vehicles than in Q1.

Tesla officials said the shipment shortfall was the result of an "extreme production ramp-up."

Tesla said it produced 18,345 vehicles in Q2, or "just under 2,000" vehicles per week. The company added that half of Q2's production occurred within the last month. However, physical deliveries were "lower than anticipated" at just over 14,000 versus the 17,000 it expected. Those orders included nearly 10,000 luxury Model S cars. The remaining vehicles were sport utility Model X cars.

Today's news has investors worried that Tesla will miss its year-end delivery target between 80,000 and 90,000 vehicles this year.

But even with today's news, Tesla says it's on pace to meet that goal.

On June 21, Tesla announced it would buy SolarCity Corp. (Nasdaq: SCTY) for $2.8 billion. Analysts are highly critical of the deal and question the rationale behind the union. Tesla says the merger will provide significant benefits to shareholders, customers, and employees.

Since 2006, Musk has aimed to transform Tesla into a vertically integrated energy and transportation company. He believes the SolarCity acquisition will get him there.

The other setback for the TSLA stock price came last week when it was revealed a Tesla Model S in self-driving mode was involved in a fatal crash on May 7. The cause of the accident is not yet known and an investigation is ongoing.

Some investors have retreated from the slumping TSLA stock price as the negative news piles up. But we are actually seeing a great buying opportunity now that Tesla stock has gone "on sale."

How to Play the Volatile TSLA Stock Price Long Term

Tesla is no stranger to controversy and setbacks. It has weathered worse and will weather the latest.

Renowned investment manager Ron Baron, with $21 billion in assets under management, is bullish on Tesla stock.

Last month in a CNBC interview, Baron said Tesla could be a stock to own for the next 10 or 20 years.

Baron has built up a $300 million stake in the company since 2013. While he has not profited in the short term, he noted it takes time for him to make money.

Baron, like many, is not just buying Tesla stock. He's buying Elon Musk. And that's a sentiment shared by Money Morning experts.

Investors comfortable with some short-term risk have an excellent buying opportunity now. While the TSLA stock price is down 12.69% year to date, its three-year and five-year returns are 60% and 621.77%, respectively.