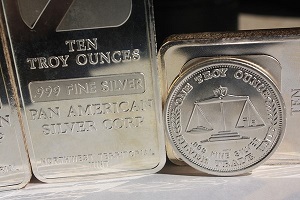 Overall, Money Morning Resource Investing Specialist Peter Krauth expects the price of silver to keep on climbing this year, to more than $22 per ounce. That's another gain of more than 8% from current levels, continuing the strong silver bull of 2016.

Krauth cautions that the silver bull may see some short-term volatility, but the investment case for silver prices today is intact. Here, we discuss the volatility and then the fundamentals underlying Krauth's forecast.

Silver as a Safe Haven: Brexit and the Aftermath

What underlies the silver price forecast? Precious metals are a safe-haven investment and become investor favorites in times of uncertainty. Right now, in the aftermath of the British vote to leave the European Union (EU), the world faces more uncertainty than it did prior to the vote. This may cause many investors to move toward both silver and gold.

Why? The UK leaving, a move known as Brexit and voted on June 23, causes both near- and long-term uncertainty. Observers believe that it will take at least several years for negotiations on trade, movement, and other issues to be finalized. As negotiations go on, many issues important to trade, economics, and governance, in both the continent and the UK, will be uncertain — up for grabs.

The move will likely have an impact on the many U.S.-based companies that do business in the UK, including Coca-Cola Co. (NYSE: KO) and JPMorgan Chase & Co. (NYSE: JPM).

In the political world, the Brexit vote has already caused upheaval. UK Prime Minister David Cameron, who campaigned for the UK to stay part of the EU, resigned immediately after the vote was announced. His successor is expected to be in place by October, but the vote is likely to be contentious due to the closeness of the vote (it won by only a few percentage points) and other issues relating to the UK's relationship to the continent and the rest of the world.

In our new 2016 report, you'll find…
• The four best types of physical gold and silver to own
• The five best silver and gold exchange-traded funds (ETFs) to invest in right now, two of which have surged a combined 69% this year
• The four most reputable metals dealers to purchase gold and silver from

In addition, there is some anxiety about the ongoing stability both of the UK and the EU. Last year, Scotland defeated a referendum that would have made it independent of Britain. On June 23, however, Scotland was firmly in the "Remain" camp. Analysts believe that the move for an independent Scotland may soon gain renewed strength.

Countries who are relatively strong in the EU, such as Germany, could, as a result of Brexit, become stronger. EU countries whose economies lag, such as Spain and Greece, could become increasingly restive about their position and the benefits of the EU. Long term, the structure of the EU might be in question.

The uncertain outcomes and the uncertainty about Europe that will follow in its wake may make silver pull back in the aftermath of Brexit. Long term, however, uncertainty is a net positive for silver prices today.

Silver Prices Today Will Move on Supply and Demand

Remember Economics 101? Prices will rise if supply is limited and demand is strong. That's the enviable place that silver is in.

Supply has been declining all year. For the first time in five years, overall output coming out of silver mines will be less than it was the year before. CPM Group estimates that global production of silver will decline 2.4%, to slightly less than 785 million ounces.

The demand picture, though, is very robust. Although many investors think of the gray metal as one used in jewelry or coins, there are many and varied industrial uses for silver. One is in the fast-growing clean energy market. Each solar panel needs photovoltaic cells, and each cell needs a minimum of 20 grams of silver.

Overall, industrial uses will account for approximately 70 million ounces of the grey metal this year. It's the fourth consecutive year of rising demand for silver from industry.

Wall Street's Next Wipeout? A Wall Street analyst has just unveiled little-known "crash insurance" strategy that could "insure" your assets – up to $1 million or more – with the potential to keep you fully covered before the Brexit sends the unprotected to the poorhouse. Read more…