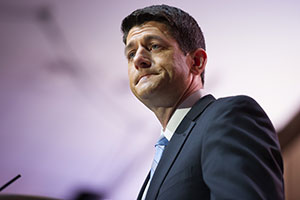 Speaker of the House Paul Ryan

If, that is, President Barack Obama's administration doesn't take the initiative upon itself to do so.

Ryan told FOX's "The Kelly File" yesterday that during his time running alongside former Massachusetts Gov. Mitt Romney in the 2012 presidential election, he was often debriefed with sensitive intelligence.

He's now worried about Clinton's access to the same type of information...

Given that the FBI found the former secretary of state "extremely careless" in handling top-secret information, Ryan said that Director of National Intelligence James Clapper should at least deny her the classified briefings a party's presidential and vice presidential nominees get.

And if Clapper doesn't oblige, he warned, then Congress could step in.

"We're not going to forego any options," Ryan told Megyn Kelly. "People have been convicted for far less. This certainly does underscore the belief that the Clintons live above the law, and this is one of the reasons why people are so dissatisfied, so upset about government."

Laws, Schmaws: Companies that do business with the federal government are banned from donating to super PACs. But according to one media outlet's investigation, ignoring the ban "has become widespread in both congressional and presidential politics." Here's more on super PACs that flout U.S. election laws...