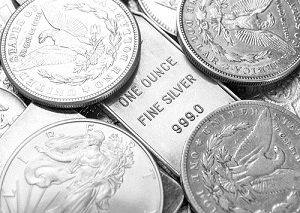 In fact, Krauth has released a brand-new silver price target for 2016…

Trending: How to Profit from the Post-Brexit Paradigm

But first, we want to make sure investors know why silver prices have skyrocketed 45% since the beginning of 2016…

Why Silver Prices Are Soaring in 2016

Precious metals like gold and silver are viewed as safe havens for investors during times of economic uncertainty.

And at the beginning of 2016, the financial instability of the Chinese and Japanese economies caused investors to panic…

One area especially concerning investors was the slowing GDP growth in China, the world's second-largest economy.

China's GDP growth rate was 7.6% in January 2014, and fell to 6.8% in January 2016. That's a 1% loss in just two years. Investors are also weary of the information coming out of China, fearing the economy is in worse shape than reported.

And the problems in Japan were even more worrisome…

While the issues in China and Japan helped create the silver price rally, the Brexit vote fueled it even further…

With 45% gains in 2016, it doesn't seem like there's much room left to profit. But Krauth has found one metric that shows why silver prices will continue to climb…

Krauth uses the gold/silver ratio to help determine where silver prices are headed. The ratio measures the number of silver ounces required to purchase an ounce of gold.

Krauth says he fully expects gold to keep rising, which is a great sign for silver investors. According to Krauth, the ratio average has been 60 over the last several decades. That means it would take 60 ounces of silver to purchase one ounce of gold.

"Although gold is considered the ultimate safe haven, the price of silver has outpaced the yellow metal in the wake of the Brexit vote," Krauth said. "Over the past week alone, the silver price has soared ahead, outpacing gold's gains by a substantial 15%."

Krauth fully expects silver prices will reach $22 by the end of the year, but he says not to expect it in a straight line. That's because gold and silver can be subject to wild price swings like we saw from the Brexit vote.

The Bottom Line: For patient investors, Krauth's $22 silver price prediction means you can still gain potential profits of 8.5% by the end of the year. But by the early part of 2017, he sees silver prices climbing to $23. That's a potential profit of 13% from today's trading prices of $20.27.

Up Next: Is Sears Doomed for Bankruptcy?