Investors need a new reason to love Apple stock, and an acquisition of a big-name media company just could do the trick.

That's much worse than the overall market, which was roughly even over the past 12 months despite a lot of volatility.

The disenchantment with Apple stock flows from the flattening of iPhone sales over the past year. The iPhone accounts for about two-thirds of Apple's revenue and is the engine behind the company's spectacular growth over the past decade.

But as the smartphone market reaches maturation, Apple can no longer depend on the iPhone to fuel its growth. While the iPhone will continue to generate billions in annual revenue and profit, future Apple stock price gains will depend on the tech giant's ability to create new ways to grow its business.

That's where the acquisition of a major media company comes in...

But this would be more than an add-on acquisition. Buying a media company would cement a shift in the focus of Apple's business model from hardware to services.

And that shift has already started. In the most recent quarter, services was the only Apple segment that rose year over year - and it rose 20% to boot. In fact, services made up 11.8% of Apple's March quarter revenue - second only to the iPhone's dominant 65%. 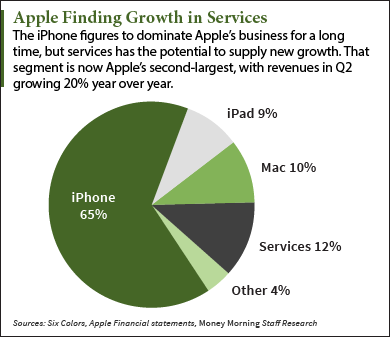 Apple bought Beats Electronics in 2014 and launched Apple Music to capitalize on the migration of consumers from music-buying to music streaming.

Apple sees a much bigger opportunity in streaming video...

This Will Be a New Catalyst for Apple Stock

Nielson data shows that the number of minutes U.S. adults spend watching traditional TV has slipped more than 8% since 2012. But the amount of time spent watching streaming video has increased 111%.

Of course, Apple could build up a video streaming business from scratch. But the field is crowded, and the company's efforts to launch its own service have been delayed for years by stalled negotiations with the television networks.

Plus, Apple has a second objective in buying a media company. Apple also wants to get into the content creation game itself.

On this front Apple has already taken a tentative first step. In March it announced plans for a six-episode series, "Vital Signs," featuring Dr. Dre.

So the odds are that Apple will try to tackle both problems by using some of its $233 billion in cash to buy a well-established media company.

Here are Apple's choices - as well as their pros and cons...

Who Will Apple Buy?

The company has several properties Apple would find attractive, including channels HBO, CNN, TBS, and TNT, as well as the Warner Bros. studio. TNT also has rights to televise NBA games.

Time Warner would be a good fit for Apple's streaming video strategy. But TWX would come with a high price tag. It has a market cap of $58 billion. The huge size of the deal would be uncharacteristic for Apple but is an indication of how far the company might be willing to go to pursue its shift in strategy.

Buying Time Warner could complicate Apple's efforts to cut content deals with other networks, but that hasn't been going so well anyway. An intriguing possibility that would definitely boost Apple stock.

Apple buying Disney might seem odd, but the House of Mouse is about much more than theme parks. Disney owns ABC and ESPN as well as several movie studios and music publishing enterprises. Disney is also much more of a tech company than many realize, with much of the "wow" factor in its park and animated films reliant on cutting-edge tech.

But Disney is a huge company in its own right, with a market cap of $158 billion. That would be tough even for Apple to swallow. And the resulting behemoth could prove unmanageable. Although this possibility gets raised from time to time, it's very unlikely.

A deal to buy Netflix would give Apple just what it needs. Netflix has forged plenty of content deals and has a large global subscriber base (81 million as of April). It's the recognized leader in streaming video. NFLX also has the strong original content Apple seeks.

While not cheap with a market cap of $40 billion, Netflix is far more digestible than Time Warner or Disney. However, it owns no TV networks and the deals it has could possibly be jeopardized by an Apple acquisition. Still, an acquisition would give Apple TV the jumpstart it needs and would certainly drive AAPL stock higher over time.

Netflix also has reason to cozy up to Apple. Original content costs a lot of money, and Apple has deep pockets. Netflix is facing slowing subscriber growth as well, which could get a shot in the arm from Apple's vast customer base of 800 million.

If Apple does pull the trigger on a deal for a media company, Netflix is the most likely target.

Other media companies also sometimes come up as potential Apple acquisitions, but these all have deep flaws.

These Dividend Aristocrats Are "Kings" of Return: Investors often seek out "dividend aristocrats" for their superior returns, but among this group there's an even higher class. These so-called "dividend kings" have a track record of increasing their dividend twice as long as the aristocrats - 50 years as opposed to 25. It's an elite group - just 18 in all. And we've got the entire list right here...

I enjoy reading your ideas and comments.