Conventional wisdom holds that Wall Street is rigged to favor the big traders and that you'll never win.

The implication, of course, is why even try?

I've never believed that, and you shouldn't either.

In reality, there are plenty of savvy investors who beat Wall Street at its own game consistently, including Sir John Templeton, the legendary Jim Rogers, Stanley Druckenmiller, and Warren Buffett, just to name a few.

Here's what you need to know – and how to profit.

Most investors believe they'll never beat the markets. According to their way of thinking, the deck is so heavily stacked against them, so why try?

Yet, I'm here to tell you that YOU can beat the Street.

YOU can do this – starting with understanding something called "Gambler's Ruin."

If you've never heard the term, you're not alone.

Gambler's Ruin is a mathematical principle that deals with the preservation of assets – or, more accurately – the probability that you'll lose them over time.

Imagine a game with two players. 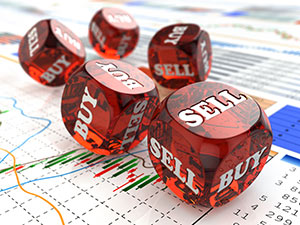 Both players – let's call them Player One and Player Two – each have a finite number of pennies, which they flip one at a time, calling "heads" or "tails."

The rules are very simple – the player who calls the flip correctly gets to keep the penny. Since a penny has only two sides, it would seem on the surface that each player has a 50/50 probability of winning.

That's the case for each flip, but here's where you need to really pay attention.

In mathematical terms, the chance that Player One and Player Two (P1 and P2, respectively) will be rendered penniless is expressed as follows:

In plain English, what this formula tells you is that if you are one of the players, your chance of going bankrupt is equal to the ratio of pennies your opponent starts out with to the total number of pennies.

There are all sorts of wrinkles in the theory but we'll leave those for another time, and for a more mathematically oriented discussion.

What you need to understand at the moment is that the player starting out with the smallest number of pennies has the greatest chance of going bankrupt.

In the stock market the player with the smallest number of pennies is you… and me…and any other individual investor, for that matter, who is up against the big boys pushing highly-leveraged billion dollar portfolios.

Chances are you understand this at some level if you've ever played a table casino game in Las Vegas, Macau or Monte Carlo. That's because the longer you stay at the tables, the greater the probability that you will lose. The house simply has more money and better odds.

The big banks, hedge funds and traders know that they have more pennies than their individual patrons (retail investors) so they can play the game longer. Not better…longer.

This means they come out ahead because the smaller players get wiped out or, as many are tempted to do right now, give up.

Gambler's Ruin, you see, dictates you will give up your assets unless you have some method of protecting them. Whether that's at the world's great casinos, as part of a corner game of Three Card Monty, or in the stock markets, it makes no difference.

The only question is when… unless you change your behavior.

When I talk about this at presentations around the world I see lots of elbows and head-nodding in the audience as people begin to process what I'm sharing with you today.

You just need to change your game up to take away the advantage Wall Street otherwise enjoys.

When on Wall Street, Do as the Big Firms Do

The easiest way to do that is to line up your money with theirs instead of trying to fight it.

Institutions are very "name driven," but they are hampered by their size.

This means they can't just waltz in and pick up shares of a company they want to buy any time they want. So, they have to engineer a big rally… to sell (to you)… and a big down day… to buy (when you're selling in a panic).

This is why big traders are especially active at or near big bottoms or market tops, and you should be, too.

Second, traders are paid to win and hate losing money no matter how much of it they've got.

That why the big boys will often lock in stability and profits with one or two big-name investments backed by many of the same Unstoppable Trends we follow. For them, it beats trying to make 30-50 companies "work" by trading them into the ground the way individual investors do, especially when confronted with something like the Brexit or a protracted downturn and a paralyzed Fed, for instance.

And finally, big traders tend to stick with their winners.

They may trade around them but most build a core portfolio, then guard it like a hawk, depending on their market expectations.

Individuals, on the other hand, seem obsessed with the thrill of the chase. It's sexy, it's fun to talk about at cocktail parties, and it makes for great dinner table conversation. That is until you get into a pissing match with a big trader determined to hammer you into submission and take your money at the same time. Then it's downright unpleasant.

Institutions are under extreme pressure to trade actively. They can't just step aside. They will offload their risk to unsuspecting individual investors every chance they get and in the process transfer your money to their pockets.

So don't make the irrational decisions that give them the opportunity to do that:

… Confine your investments to the same Unstoppable Trends they do

… Buy only the best, "must-have" companies they do

That way you'll be lined up for profits no matter what kind of day the markets are having, and no matter who's trying to separate you from your money.

Editor's Note: Conventional wisdom might say that you can't beat Wall Street – but that's not true. In fact, profitable investing comes down to a handful of simple principles that Keith uses every single day to identify choice entry points and opportunities. To get access to Keith's complete report outlining these principles, as well as his upcoming investment pick, sign up for Total Wealth here.

I will like to learn remedy against gambler's ruin