What if neither Republican Donald Trump nor Democrat Hillary Clinton won the 2016 presidential election?

The idea isn't completely unrealistic, particularly in a presidential election year marked by one bizarre and unpredictable turn after another.

And there is a way it could happen, given the peculiar laws that govern U.S. presidential elections.

At the very least, we have the ingredients required for both Trump and Clinton to be denied the White House.

What's more, many members of both parties are resisting falling in line behind their nominee...

Lack of Love for Trump and Clinton Opens a Door

A number of Republican leaders have refused to endorse Trump's candidacy. One particularly discontented segment of GOP insiders - the so-called "Never Trump" forces - continue to work up potential schemes for replacing him.

Meanwhile, supporters of Vermont Sen. Bernie Sanders have not gotten past their grievances against Hillary Clinton built up over the grueling primary campaign. Many believe she rigged the nomination in her favor by securing a majority of the Democratic "superdelegates" before the primaries even started.

They also have reservations about Clinton's deep connections to the Washington establishment and worry that she's in the pocket of her big money donors.

The higher than normal level of dissatisfaction with the two main 2016 presidential election candidates opens up the door for an unprecedented disruption to the electoral process that could put a third-party candidate in the White House.

In 2016, that would be Libertarian nominee Gary Johnson, who once served as the Republican governor of New Mexico. That makes Johnson more mainstream than most U.S. third-party candidates and thus more likely to draw interest from an electorate profoundly unhappy with the choices of Clinton and Trump.

Now it's true that even in the 2016 presidential election Johnson has virtually no chance of winning the 270 electoral votes required.

But because of the 12th amendment, he doesn't have to...

How Gary Johnson Could Win the 2016 Presidential Election

In a presidential contest in which two candidates split the electoral votes, the only chance for a deadlock is a 269-269 split - highly unlikely. 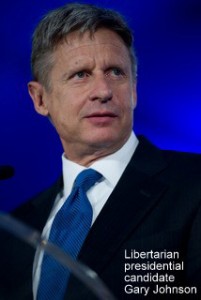 Third-party candidacies haven't created Electoral College problems in the past because, while they often collect significant chunks of the popular vote, they rarely earn any electoral votes. The exception was Theodore Roosevelt in 1912. Running as a Progressive Party candidate, TR managed to take 88 electoral votes to place second to Democrat Woodrow Wilson, who won in a landslide.

The most successful third-party candidate since then, Ross Perot, got nearly 19% of the popular vote in 1992 but no electoral votes.

But Gary Johnson has a path to the White House none of these candidates could hope for. Assuming the 2016 presidential election will be a close one, with Trump and Clinton roughly splitting the total of 538 electoral votes, all he needs to do to win is to take just enough to prevent either of them from reaching 270.

It's not as hard as you might think. Depending on how the electoral votes split, as few as four electoral votes could do the trick. Of course, the more Johnson gets, the better his chances of foiling both Trump and Clinton.

He just needs to adjust his strategy...

What Libertarian Gary Johnson Needs to Do

What Johnson would need to do is focus his entire campaign on the handful of states most likely to vote for a moderate Libertarian like himself. Jason Sorens, a professor of government at Dartmouth College, did a statistical analysis last year to identify the states with the most Libertarians.

The top six were Montana, New Hampshire, Alaska, New Mexico, Idaho, and Nevada. That's where the Johnson campaign would focus its efforts.

Of those, I believe he's most likely to take New Mexico's five electoral votes and New Hampshire's four. Johnson has a good chance to win New Mexico because it's also his home state. New Hampshire is a good possibility because it has a particularly strong libertarian streak. 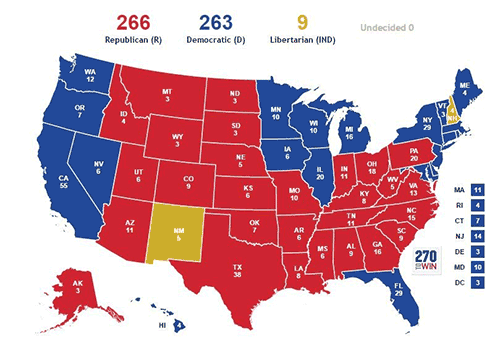 As you can see, both Trump and Clinton are short of 270 electoral votes. And here's where it gets interesting...

According to the 12th Amendment, the failure of any candidate to win the requisite number of electoral votes throws the election to the House of Representatives.

But instead of voting as a body, each state gets one vote, with a majority of 26 needed to carry the day. And they're only allowed to vote among the top three vote-getters in the 2016 presidential election - which would include Johnson.

State delegations decide amongst themselves which candidate will get their vote. At the moment the Republicans hold sway, with control of 33 state delegations to the Democrats' 14 (three are split 50-50).

It is not hard to imagine GOP legislators with a dim view of Trump banding together to elect Johnson, himself a former Republican.

But the electoral votes aren't officially counted until a joint session of Congress in January - the newly elected Congress, not the one currently in office.

That probably means a slimmer GOP majority, but would keep Johnson's chances of winning alive. Some Democrats, wary of Clinton, might even go along.

(By the way, if the House ends up in a 25-25 tie and can't resolve it, the vice president -- chosen separately by the Senate among the top three vice presidential candidates in a similar vote --becomes president.)

Of course, a lot of people, particularly advocates for Trump and Clinton, would object to having a president chosen by the House of Representatives - and the third-place finisher at that.

But the 12th Amendment makes it possible.

The Real Reason Congress Gets Nothing Done: Our do-nothing Congress is a national joke, though not a very funny one. Over the past 16 years, Congress has passed fewer and fewer laws. Most people blame gridlock for the lawmakers' lack of accomplishments. But that's only half the story. You'll be shocked when you see what members of Congress actually do most of the day...