The 28-member NATO alliance will meet in Warsaw this weekend.

One major topic that's certain to be on their agenda: defense spending.

You see, NATO's budget numbers were released on Monday and they revealed that only five member countries — the United States, Greece, the United Kingdom, Estonia, and Poland — currently meet the requested 2% spending minimum of their prospective GDPs on defense.

And of those five countries making that percentage threshold, the United States contributes the highest proportion by far: 3.61% of its GDP.

Congress' Trillion-Dollar Budget Crisis No One Is Talking About: The projected cost of updating America's nuclear program is $348 billion from 2015-2024. But independent estimates have projected an even more startling price tag…

The second-biggest NATO defense spender is Greece, at 2.38%. 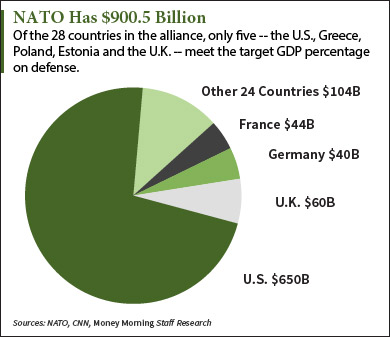 Two years ago, NATO started pushing European countries harder to increase their spending. All member countries that fell below the minimum committed in 2014 to gradually increase military spending within this decade. Regardless of their promises, defense spending from European members of NATO fell about 0.4% last year.

Specifically, economic powerhouses like Germany and France spent just 1.19% and 1.78% of their respective GDPs on defense in 2015. Iceland, which is not an economic powerhouse (it doesn't even have its own army) forked over just 0.1%.

NATO realizes that it is overly reliant on help from the United States. And President Barack Obama, who will be making his last NATO conference appearance this weekend, is expected to again push allies to start contributing more.

If they do, and that percentage threshold is met in the near future, it would add $100 billion to NATO's defense budget.

By the pie chart US is paying 2/3 of the budget. cut the budget by 50%. Reduce US contribution to 25% and let them figure out where to get the rest if they want to spend it.
What is unsaid is WHO decides what it is spent on? This appears unaccountable. I agree with Trump and more on this one.