I'm a trader, so I have to be flexible with my risk-management approach, to hedge using different tactics and tools according to the trade in front of me.

I'm not the only one with risk management on my mind right now. Thanks to the Brexit and concerns about the European banking sector, it seems anyone with two nickels to rub together (and the instinct to protect them) is making a beeline for safety: Gold is at 28-month highs and racing toward $1,400.

In other words, gold owners are looking pretty smart right now. As a protective play, it's hard to beat.

But... what I want to show you today is how to take that unbeatable protection and turbocharge it to start bringing in serious profits.

There are plenty of ways to do this, but I'm going to show you the single best play...

Here's the Most Profitable Protection Money Can Buy

There are plenty of gold stocks out there to buy or even trade options on, like these miners:

Heck, the most "underwhelming" performance on this list, Eldorado, has still returned nearly 70% in gains since the start of the year, while Alamos has given investors more than 177% in the same time frame.

That's good performance all around and, what's more, with options plays like the ones you're about to see, the gains on these shares could be whole orders of magnitude higher. 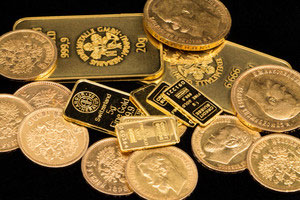 But here's the thing... Stocks can go up or down in this market, so the really smart money is playing the entire gold sector, too, with SPDR Gold Trust ETF (NYSE Arca: GLD).

It's turned in a modest but market-crushing (and above all safe) 27.8% this year, but it's the only exchange-traded fund (ETF) that's actually backed with physical gold, held in vaults. The only way shares of this instrument can be created or retired is through management's purchase of the yellow stuff.

My research has turned up a few options trades since June 10 that could work out really well for traders. I'll show you some examples, not for actual trade recommendations, but to illustrate why I think GLD shares are the best gold play out there and how to play it in the future.

The first scenario is nothing fancy - just a straight, buy-the-call (long call) option on GLD in anticipation of the stock moving higher:

You'd make a lot more, though.

By July 1, the trade zoomed as high as $4.40. That's a $1.40 increase - or nearly a 50% gain since I first looked at this scenario. And it was during the high, continuing volatility we've seen recently due to the Brexit decision.

Now, of course past performance is no guarantee of future results, but in-the-money calls and "loopholes" on GLD shares are a very smart way to play the current gold bull for extra profit and protect yourself from volatility that's likely to get a lot worse before it gets better.

Odds are you'll get plenty more chances to profit from long calls and vertical call debit spreads on these shares before it's all said and done.

The Future of Gold... Now That Every Investor Wants It

In the chart below, you can see that GLD shares had a nice upward run in June - largely in part because of the weak jobs report in May and the truckload of uncertainty the Brexit injected into global markets.

And it was that anticipation of a continued upward move that had me look at some GLD setups. 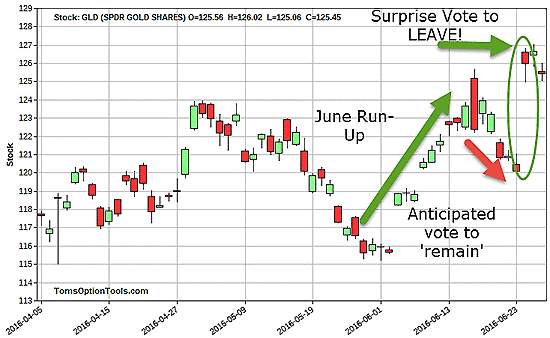 I looked for option opportunities with expirations in August so that the trades would have a chance to perform beyond the results of Brexit. What I found were the quick 56% gains I showed you, and I expect to see more soon.

GLD trailed off a bit six trading days prior to the referendum, as the consensus was that the vote to remain in the European Union would hold. But as we know, the vote shocked the world (well, except for us) with the UK ultimately deciding to leave the EU.

And that same day, the British pound fell to 30-year lows against the dollar. The Asian markets also tumbled quite extensively while the Australian Stock Exchange dropped by 3%. And, of course, the U.S. markets fell by 3.5%.

They've largely pared back those losses now and are once again flirting with all-time highs... for the moment. But I'm not expecting that to last. The Brexit vote casts the whole future of the EU and the common market into doubt, and the looming contagion in the Italian banking system doesn't bode well for a smooth ride.

What's more, you're probably going to see and hear a lot of people talking about an impending recession. For now, I can't say I agree, but I will definitely be on the lookout for any opportunities this sense of uncertainty brings.

And if the recession specter becomes a more plausible reality, or if we see seasonal bearishness in the markets, we know what to lean on for potentially profitable trading opportunities to the upside: GLD, all the way.

Some of Tom's readers are playing GLD for even bigger profits, and fast, too. Earlier this week, they had the chance to grab profits on three triple-digit GLD plays for 107.4%, 122.6%, and 126.3%... all in the same day. These gains aren't dumb luck; they happen when an unusually lucrative pattern appears in the top 2% of all stocks. They happen fast, too, usually in less than a week. Click here to learn more...

Thanks for the great read, Tom. Sounds like First Mining in that promo there. I agree they're a viable play. Cheers! -Brian

One question I do have is not how much money can be made I have no question about money right now! !!.. But I would really like to know what 6+8=14 This sounds sort of silly…Maybe I'm wrong maybe there is a reason you put that there…. wondering why and if you dont know what 6+8 is then you need to be working at something Else lol no pun intended and no I'm not putting anyone down just in case I have a hater out there and not a lover. .. okay that's enough kidding around. Let's start making lots of money not that we all need it right now but that little extra buys the boys there new toys and there are alot of ladies out there witch are very intelligent I personally know a lot and I refuse to leave them out of the equation some of them have earned a lot in there choice of career ..Some are already self made millionaires why to go ladies it's no longer a man's world out there any more …..Ladies keep going and don't stop and you soon may have the Majority of the fortune 500 companies out there … we need more ladies running for government and world jobs meaning president USA. . And priminaster for Canada. ..and UK you go girls ….?

I'll give it a try