The U.S. jobs report for June just came out and shows the strongest month of hiring since last October – with 287,000 jobs being added. And although the unemployment rate ticked up to 4.9%, up 0.20% from May, the markets are soaring.

The fact of the matter is, we’ve still got second-quarter earnings to prepare for, and investors are still uncertain of the aftereffects from the Brexit vote. And that means the markets are more likely to react to news – good or bad – which could put your trades in jeopardy.

So timing your exits has never been more crucial.

When you get out of your trades too early, you could miss out on thousands in profits.

And when you get out too late, you risk the trade going against you, turning a winning trade into a loser.

Whether it’s the jobs report, GDP numbers, the Chinese markets, the price of oil, or anything else making headlines – I want to make sure you don’t lose your money in volatile markets.

So today, I’m going to show you the only two numbers you’ll ever need to know to confidently (and profitably) make your exits. 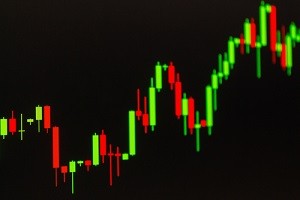 Being a technical trader means that you study price patterns. And one of the key attributes to look for in a pattern is where supply and demand lie.

You could say that the pricing of underlying securities is a reflection of supply and demand. Now you can actually see supply and demand by drawing in trend lines on stock charts. Trend lines can be ascending, descending, or parallel, and are important because they tell you where the two most important numbers are when trading during volatile times: “support” and “resistance.”

“Support” is the price at which an underlying stock or ETF gets “supported” from going any lower. And this is where demand comes into the picture…

Eventually, people want to make a profit or their formulas or metrics used in valuing a fair market price before the underlying stock or ETF reaches the top, making it too expensive to buy. If this price point is a price at which they previously sold, then it’s deemed “resistance.”

Resistance is where the price of the underlying stock or ETF “resists” going any higher in price. Supply becomes available in that market because participants are selling their stocks and ETFs to lock in profits.  The market makers have to buy back the stock if no one else does and reduce the price at which they want to buy it.  So long as people are willing to sell while lowering the buying price, the price of the stock or ETF will decline until it becomes too low to sell – but attractive to start buying.

When support or resistance is broken, this signifies a potential shift in sentiment of the market participants. For example, Britain’s surprising vote to leave the EU caused the markets to sell off quite viciously, causing the upward trend to be broken.

The ascending support on the three major U.S. market averages, the Dow Jones Industrial Average, the Nasdaq, and the S&P 500, were broken to the downside. This showed us how afraid and uncomfortable people were with the stock valuations after the decision – and at the possibility of other countries following Britain’s decision to leave as well.

Here we are now a couple weeks later, and prices on the indices have bounced back close to where they were on June 17, one week before the results of the referendum were announced.

But we still don’t know what will happen or the impact that decision will have on the markets in the long run. Combined with other factors, like second-quarter earnings season, and we’ve got the makings of more market volatility.

So I’m going to show you why the markets may hit price points where we can take in some profits – and why we could see a bit of retracement.

How to Identify Uptrends and Downtrends Using Support and Resistance

My proprietary tool, Money Calendar, shows an overall bullish market sentiment this month. But remember… the markets don’t go up or down in a straight line.

An “uptrend” is defined as a series of higher highs and higher lows, so a pullback doesn’t mean a bear market or a reversal – it just means a pullback in price, maybe to an ascending support.

Here’s an example on DJX, which tracks the Dow Jones… 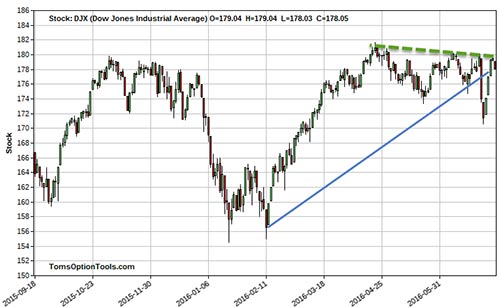 This chart shows the ascending support line at $178. That is a reasonable price to have expected the DJX to get to.

It traded up and closed above the ascending support line (solid blue line), but you can see that rather than bursting, it stalled out in a slightly declining, shorter, overhead resistance line (green dashed line).

Here’s another look at support, this time on the NDX, which tracks the Nasdaq…

The solid blue lines represent an ascending support line and a declining resistance line, forming a triangle or wedge pattern.

The NDX also broke support only to bounce back up to the ascending support line. If it stalls here, then this is a classic technical pattern we’ll talk about soon: when old support becomes new resistance.

Let’s look at one more example on SPX, which tracks the S&P 500…

SPX also shows a bounce back higher than the old ascending support line. It seems as if it’s ready to go to its all-time highs but, for now, is stalling at a slight overhead resistance line (the green dashed line). It may muscle up to the solid blue horizontal resistance before it rolls over (if at all).

One of the challenges my students have presented to me over the years is when to get out of a trade for profits. And I tell them the same thing I’m telling you: follow the support and resistance. By doing so, you’ll know what to expect from a stock or ETF before you find out the hard way.

Instead of guessing how high the markets could go, and instead of guessing where your target price is while placing your trades, you could have ascertained this beforehand. Always remember the importance of knowing a stock’s or ETF’s expected price move before you spend one penny on a trade.

And that’s exactly why I wanted to show you these support and resistance lines and how you can use them (the way professional traders use them) to lock in some gains during volatile times. And when you draw in the trend lines, like what I’ve done in the charts above, you can essentially secure your profits ahead of time.

By following these two numbers (support and resistance), you can see where an uptrend is stopping and a downtrend is forming. Whether or not a full-scale downtrend ensues is to be determined, but if you were long, this overhead resistance point may just be an appropriate place to close your positions – and take some profits.

This way you remove the guesswork – and surprises – out of your trading. You’re not caught off guard trying to figure out what do after an unexpected price movement has happened. Instead, you’re in control of your emotions – and ready for whatever’s next in the markets…

And that’s the best way to rescue your profits in volatile markets.

The Most Profitable Protection Money Can Buy: Gold’s had a stellar run up in 2016, with even the most underwhelming gold stocks returning double digits. But individual stocks will follow this choppy market up and down, so the really smart money is playing the entire gold sector. With this investment, so can you…