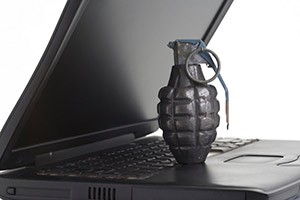 Facebook Inc. (Nasdaq: FB) is facing a $1 billion lawsuit for allegedly allowing Palestinian militants from the Hamas organization to use its platform to plot terrorist attacks.

The Facebook lawsuit was filed yesterday by the families of five victims who were injured or killed in the June 14, 2014, attacks in Israel that were coordinated by Hamas militants.

The Hamas group is considered a terrorist organization by the United States, European Union, and Israel. The lawsuit, filed in the U.S. District Court for the Southern District of New York, states that Facebook knowingly allowed the terrorists to share operational and tactical information with their members and followers.

Mind the (Generation) Gap: Baby boomers and millennials go together like Old Bay seasoning and vanilla ice cream. And statistics prove as much. Here's a look at the disparity between the two generations...

"Facebook has knowingly provided material support and resources to Hamas in the form of Facebook's online social network platform and communication services," making it liable for the violence against the five Americans, the lawsuit said, according to Bloomberg. "Simply put, Hamas uses Facebook as a tool for engaging in terrorism."

Facebook's response to the lawsuit, issued last night, was that it wants "people to feel safe when using Facebook. There is no place for content encouraging violence, direct threats, terrorism, or hate speech on Facebook."

This is not the first time the social media platform has been accused of harboring and aiding terrorists. On June 14, the family of a victim of the Paris terrorist attacks filed suit against FB -- as well as Twitter Inc. (NYSE: TWTR) and Alphabet Inc. (Nasdaq: GOOG, GOOGL) -- claiming that the platforms "knowingly permitted the terrorist group ISIS to use their social networks as a tool for spreading extremist propaganda," reported Fortune on June 18.

Hillary's College Curriculum: The "Hillary Clinton Student Loan Plan" has been officially announced and while it has a lot of perks, the proposal will also likely cost Uncle Sam $1 billion. Here's how...