These are chaotic times in the global energy sector, to put it mildly.

Here in the United States, we're in the grip of an acute oil and gas company debt crisis, as rising oil prices have come far too late to save leveraged companies that simply borrowed too much during the good times of expensive oil and cheap credit.

Elsewhere, last month's shock "Brexit" vote has upended foreign exchange, sending the euro and sterling into free fall relative to the dollar - the currency in which rapidly rebalancing crude oil is priced.

That same British vote has dealt a knockout blow to the City of London's tenure as the global capital of energy sector financing. Hundreds of billions of dollars are in play and are now on the hunt for a new place to call home.

But all this chaos and uncertainty brings with it opportunity. There are big changes coming to the way energy finance works, and right now there's a breakthrough underway in Europe that's proving more profitable than anyone could have imagined.

And it's done so in record time...

Wind power has made some impressive advances over the past several years. These have included major reductions in operating costs and even grid parity (matching costs of production from coal and natural gas-fired plants) in many regions.

Nonetheless, opposition has remained when it comes to environmental impact, but not in the way you might think.

True, as a renewable source of natural power, wind has none of the pollution problems associated with fossil fuel extraction or usage.

Less than 500 of the 30,000 non-U.S. publicly traded companies trade on the "Big Board" in New York, even if they are growing by double digits.

We believe this growth should be available to our Members, and we've arranged a way for them to be able to trade around the world. Click here for details.

The downside has been a spike in construction costs as measured by project cost per megawatt hour (MWh) of power produced. But many see the large land-based footprints as eyesores and threats to migrating birds. Both of these have led to increasing interest in moving wind generation offshore.

Dong is already the world's leading developer of offshore wind power, and the award was for the first of five Borssele projects. The initial project will provide about a million households with electricity, while the entire five-project 3,500 MW approach will allow the Netherlands to reach its goal of 16% sustainable energy within 10 years.

The Dong project will be the largest in Europe thus far. At the moment, the London Array, off Kent in the outer Thames Estuary, is the biggest offshore wind installation, at 630 MW. The average facility comes in at slightly under 338 MW.

But size isn't the only thing that makes Dong's new Borssele project so special...

Borssele Will Reach a Money Milestone Four Years Ahead of Schedule 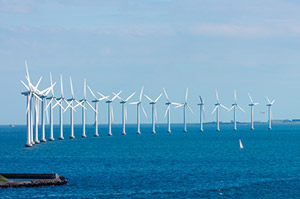 Instead, what makes it truly important is the expected construction costs. At €72.70 ($94.50) per MWh it will be by far the cheapest offshore project ever, easily eclipsing the lowest to date - a €103 per MWh operation set by Sweden's Vattenfall AB in 2015.

Even figuring in transmission cables and the link-up to onshore grids, Dong will still be coming in at only €87 per MWh. The company itself had originally put costs at closer to €100.

In a Financial Times comment, the company's head of wind power, Samuel Leupold, noted, "We are reaching a critical industry milestone more than three years ahead of time. This demonstrates the great potential of offshore wind."

You see, Dong had earlier said it would break the €100 threshold only in 2020. While the company's efficiency standards came into play in reducing construction costs, the project has also benefited from the low cost of steel and the availability of discounted offshore installation vessels thanks to a glut caused by the decline in oil prices.

All told, in a stark departure from normal energy projects, Dong's project at Borssele is coming in at €2.7 billion ($2.9 billion) below budget, will generate up to 22.5% more electricity than planned, and come on line in 2023-2025.

But rather than being the culmination of a process, this is actually a harbinger of things to come...

The rise of grid parity considerations means that the mainland of Europe has entered into a discussion that had so far been reserved only for wind and solar in the United States, and solar in the Middle East and the Mediterranean.

Now interest is building rapidly. The bidding round for the project won by Dong had 38 competitors. Meanwhile, the tender for the second Borssele wind farm (Borssele Wind Farm Sites III and IV) will be closed in the last week of September 2016.

Subsequently, beginning in 2017, development of Dutch offshore wind capacity will move off the coast of the South Holland and North Holland provinces.

And that's not the only thing in the Dutch energy sector likely to be copied elsewhere...

Moving forward, the Dutch government's successful model for public/private coordination in offshore development is also likely to be mirrored elsewhere. The Dutch government regulates all conditions for the construction of the wind farms - exact location, local consents, and connection to the grid - providing an operating grant to the producer.

The producer receives financial compensation for the renewable energy it generates. In the subsidy and permit tenders the lowest bid will be awarded. That company will receive a permit to build and operate the wind farm and is granted the associated subsidy. This makes the construction of the wind farms cheaper.

Previously, companies had to receive consents before they could compete for the grant and had to install the export cables to shore themselves. Now TenneT Holding BV, the Dutch transmission system operator, takes care of the offshore grid connections.

The success of this model means we're going to be seeing more offshore wind capacity entering both the global energy balance... and the finance meetings surrounding what shape the ongoing energy mix will assume.

I'll be attending these meetings over the next few days and weeks, and I'll be reporting my findings to my Oil & Energy Investor readers. Click here to make sure you don't miss a single update.

Follow Kent on Facebook and Twitter.
Middle East "Oil Bomb" Set to Blindside U.S. Investors: A Saudi-led coalition has unleashed an "oil weapon" on the U.S. The first shockwaves are expected to hit hard and leave investors stunned. Some could be left penniless. Yet people who see clearly what's about happen now have the chance to add six figures to their account. In fact, $109,845 is a conservative estimate of the profits now at stake. Full analysis found here.

But how can US investors profit from this? I cannot find a single brokerage firm willing to allow me to invest in many EU firms UNLESS they're majors and then only through ADRs.

There's SO much opportunity off-shore but it's out of reach to many US residents due to US brokers not trading in most of those 'up and comers' – even if they've been trading on major (non-USA) exchanges for years.

How about some leads please?

Hi, Larry – thanks for taking the time to write. We feel exactly the same way, that all this growth and opportunity should be available to every investor.

If you click on the link in the sidebar above, “Invest Worldwide,” you’ll be taken to your Member Benefits page. You can find details there on the page, but we’ve arranged for our Members to be able to trade on numerous foreign stock exchanges through our partners at EverBank/EverTrade.

You’re even elligible for some free domestic trades, too. Please click through and have a look at your perks and benefits. They’re yours just for reading Money Morning.