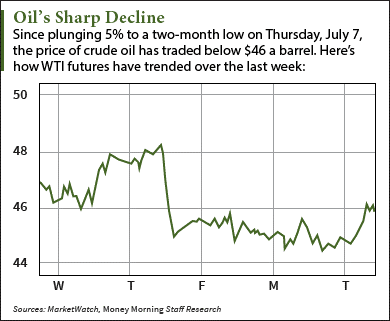 The price of crude oil today (Tuesday, July 12) rose above the $46 level for the first time in three days thanks to a weakening U.S. dollar and bullish monthly OPEC report.

Around 9:30 a.m., West Texas Intermediate (WTI) crude oil prices were up 3% and trading at $46.14 a barrel. Today marks the first time since Thursday, July 7 that the U.S. benchmark trades above the $46 level. Still, futures for August delivery are down 4.5% so far this month.

The global price of crude oil saw even more gains in early morning trading. The Brent crude oil price – which is the global benchmark priced in London – added 3.5% to trade at $47.85 a barrel. Futures for September delivery have fallen 3.7% since the start of July.

Why the Price of Crude Oil Jumped Above $46 Today

The decline in the U.S. Dollar Index (DXY) is one reason why oil prices are up today.

Earlier this morning, the dollar was down 0.5% and trading at 96.10 basis points. Today's performance breaks the greenback's three-session rally since Thursday, July 8.

When the value of the dollar falls, commodities that are globally priced in dollars – like oil – typically receive a boost. That's because they become cheaper to buyers who use foreign currencies. For example, someone in China trying to buy oil with the Chinese yuan will spend less yuan per dollar to buy oil.

But the bigger news moving the price of crude oil is the release of OPEC's June market report.

Money Morning Global Energy Strategist Dr. Kent Moors – an oil market veteran who's served in the highest levels of U.S. and Russian energy agencies – says both of these trends will continue this year.

According to Moors, the fallout from the Brexit vote will likely cause more oil price volatility.

When it eventually leaves the EU, the UK will descend into a second-tier economic power and global energy investments will move from London to New York City. This adjustment will pull both London-based Brent crude oil prices and New York-based WTI crude oil prices lower over the short term.

"The lingering uncertainty around the pound will have an adverse impact on Brent oil futures," Moors noted following the June 23 Brexit vote. "Since most of these contracts are denominated in dollars, the exchange problems will also affect WTI futures in the United States."

Last week, the U.S. Energy Information Administration (EIA) reported supply levels stood at 526.6 million barrels. That's down 2.6% from 540.6 million roughly two months ago. This steep decline is largely thanks to the falling number of active oil rigs, which is down from 645 to 351 over the last 12 months.

Although the count has increased for two straight weeks, U.S. drillers won't be able to profitably boost output until WTI nears $65 a barrel. That's because these firms burn through money if oil trades for anything less. After all, many of their wells can cost as much as $3 million to drill and maintain for the entire production cycle.

Since drilling new wells is incredibly expensive, producers will be forced to get their output from what's known as drilled-but-uncompleted (DuC) wells. These are older wells drilled anywhere from six to 18 months ago that provide less output. As more companies use these DuCs, overall U.S. supply will gradually fall until WTI hits $65, which will be a high enough price to cover the operating costs of drilling new wells.

While this is happening, global demand will be steadily rising.

Both of these fundamental oil market forces will send WTI and Brent on big long-term rallies.

Stay tuned to Money Morning for opportunities on how to make money from the rebounding oil market.

Next Up: This Company Is Leading One of Europe's Biggest Energy Revolutions