Cash isn't the most exciting or dramatic asset you can hold, but, aside from gold itself, there's not much that's more vital or versatile – especially right now.

First, if you have cash, you can buy those distressed assets that have to be sold by overleveraged owners when they're forced to sell. In this way, when things go wrong, you're a "liquidity provider," much like Warren Buffett who famously made some of the best, most favorable deals of his entire life in the crisis years of 2008 and 2009. Buffett pulled off this coup by being flush with cash when hardly anyone else was.

Cash also tends to hold its own against assets that are inflated by high levels of debt, like real estate and stocks are right now. It tends to depreciate against gold, but it will do much better than overpriced financial assets like stocks when the dam breaks.

And of course, if things finally get so bad that even CNBC or Barron's admit as much, you can use cash to buy items essential to survival, like food, water, and a complete set of "The X-Files" Blu-ray discs.

So I want to show you an unbeatable cash strategy right now. You'll see how much cash to hold at any one time, and just as important, how to hold it; there's more to "cash" than pictures of dead presidents.

But in order to get all the advantages that a right-sized cash position offers, you have to understand why the dollar is strong and getting stronger…

The U.S. Dollar Is the Oxygen of the Global Economy

Everyone takes it for granted, but the "almighty dollar" determines the value of every single financial instrument in the world – stocks, bonds, commodities, real estate, art, collectibles, you name it.

And that is exactly what started to happen in June 2014, and why the dollar is strong and will likely keep growing stronger.

Sometimes different central banks act together or in concert to lower interest rates and sometimes they don't.

Right now we are in a period in which the Federal Reserve and other major central banks in Europe, Japan, and China are not only not coordinating their actions, but are often working at cross purposes, which has enormous consequences for the dollar.

And in turn, what happens to the value of the dollar has enormous consequences for other financial assets.

Let me show you a way you can track the relative strength of the dollar to determine whether you have enough cash. You can also use it to see what's coming next in the global economy.

Get to Know the U.S. Dollar Index 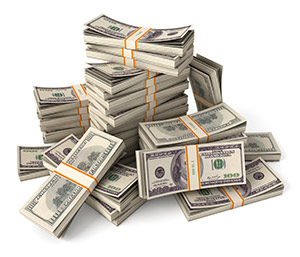 The DXY has been trading between 91 and 100 for the past 12 months, and in overall "rally mode" since 2014, when it started moving up sharply.

Keep an eye on the DXY – as of July 2016, it's above 96 and likely to move higher, which would have massive deflationary consequences for global markets.

The reasons for this sharp rally go back to the markets' reaction to the closing days of quantitative easing in the United States, back in October 2014.  The markets began anticipating this a few months before that happened.

At the same time, investors began expecting the European Central Bank and the Bank of Japan, which are responsible for setting interest rates on the euro and the yen, respectively, to move in the opposite direction. The European and Japanese economies were struggling and needed stimulus.

And sure enough, on Oct. 31, 2014, the Bank of Japan, along with Japan's largest pension fund, the Government Pension Investment Fund, announced a massive QE program that included not only massive purchases of Japanese Government Bonds (JGBs – the equivalent of U.S. Treasuries) but also stocks and exchange-traded funds (ETFs).

This is a classic case of important global central banks not coordinating policy.

While the Fed has ended quantitative easing and began raising interest rates at the end of 2015, the ECB and the Bank of Japan are still moving in the opposite direction, initiating huge new bond-buying programs to lower interest rates in their markets.

That means Europe and Japan are dead set on cheapening their currencies against the dollar. As a result, the U.S. dollar will keep rising as global investors flee lower-yielding currencies and make a "flight" to the higher-yielding U.S. currency.

That should push the dollar upward and further depress the euro and yen, and for the foreseeable future, too.

And that means it's time to increase your cash holdings.

Here's What I Tell My High-Net-Worth Clients

My suggested portfolio is 10% to 20% cash. Incidentally, that's the exact same amount I allot to gold, so you know I'm a cash fan.

At the Next T-Bill Auction

There's no fee to open an account, and no fee to buy from TreasuryDirect, although you'll pay a commission and perhaps a transaction fee if you opt to go through a broker or dealer.

Remember, there's no such thing as a paper Treasury bill anymore; you have to get them electronically. That's a good thing – there's nothing to lose or get stolen.

Here's the schedule for upcoming auctions out to October 2016.

But "cash" is about much more than pictures of dead presidents. As equivalents, the securities I'm about to show you are even safer than a bank account.

They're extremely liquid, and I prefer them to banknotes because when you hold cash at a bank or a brokerage firm, you can become a general creditor if the firm goes bankrupt. But if you own these securities, you are a creditor of the U.S. government. That makes them virtually risk-free… at least for now.

Now, admittedly, they are low return (after all, there is no yield on cash these days), but still better than you'll get from the bank.

What's more, they're very, very safe. Think of it as "cash, but better."

My favorite "alternative" place to put cash is in one-month or three-month Treasury bills.

It's very important to note, these are not bonds. They're not notes. They are bills. Remember that this is not an "investment," but a sort of secure parking area.

Here's how they work.

Like I mentioned, you won't get a great return on T-bills because they're so exceptionally safe. They're considered virtually risk-free, and they're also exempt from state and local income taxes (though still subject to federal tax).

If someone cashes out a bill before it's matured, there's some money left over, which you can bid for on the "secondary market."

You can ask your broker to help you with this, or you can do it yourself if you have a brokerage account with someone like Fidelity or Schwab.

The best part of a T-bill strategy is you don't have to do anything to redeem the bills. The government, believe it or not, takes care of it for you – it's one of the few times that's ever going to happen. On the day the bill matures, they deposit the proceeds into your indicated account of choice.

On the other hand, if you don't want to put your cash in the bank, you can simply set up your account to roll the proceeds into new bills of the same term and type next month. It's called reinvestment. You can schedule this action when you buy your initial bill, or wait until up to four days before it matures. You can reinvest like this, automatically, for up to two years.

Of course, banknotes and T-bills are far from the only cash strategy I'm recommending right now. Click here to get free access to my Cash Profit Playbook and you'll learn how to "juice" a normally low-return protective strategy for some serious gains, especially in these post-Brexit markets. You'll also get my Sure Money twice each week.

Wake up city slickers; best asset in Corn Belt States is farm ground. It does not waste sunlight on roof tops and paved streets and parking lots that creates flooding.

You mention Treasury bills reinvestment for up to 2 years, then what to do you recommend? Is there a way to get your money out without it having to go to a bank?

Not marked with a *
Looking forward

The financial, market, currency matters, economic aspects, investment opportunities with positive redults, etc., found in your report(s) are of great interest. Thank you and congratulations on your well organized and clarity of the information of your reports.

I couldn't agree more about the holding of "cash" and gold. And while I understand and respect your opinion re: the dollar, here's my question? In a world where intervention and manipulation rule the day, why do you think the Fed would just sit back and allow the clownbuck to rise past 100? I think Jim Rickards is right. I think they struck a deal in Shanghai behind closed doors to take the pressure off the renminbi by allowing the dollar to weaken and by extension, giving the Chinese currency some relief. The Fed ditched the rate hike nonsense, leaving… Read more »

Are US T-Bills available to Canadians?

HI Michael,I am new at all this investing. I have one question for you about money, i heard that bills and all currence is a thing of the past, you will not e able to take a bank cause they will not except money this is suppose to happen around end of this month is that right? THAKS!! HAVE A WONDER FULL DAY!! PAUL!!