She's got her own for-profit college scandal to worry about. 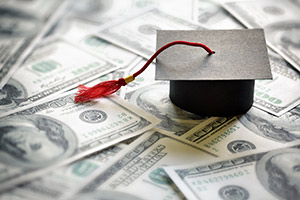 Unlike presumptive Republican presidential nominee Donald Trump, however, Clinton did not found and run a for-profit college with her name on it. But her husband, former President Bill Clinton, spent five years on the payroll of the world's biggest for-profit college operation in the world, Baltimore-based Laureate Education.

It's one more example of the hypocrisy of Hillary Clinton. But before I get into that, some background is in order.

Trump University is one of the Donald's more embarrassing scandals, and that's saying something.

In a lawsuit against Trump University filed by dissatisfied former students, former managers testified the school was "an unscrupulous business that relied on high-pressure sales tactics, employed unqualified instructors, made deceptive claims and exploited vulnerable students willing to pay tens of thousands for Mr. Trump's insights," according to The New York Times.

"If you want to know how Donald Trump approaches education, look at his so-called Trump University. It's hard to believe, but they took advantage of vulnerable Americans and encouraged them to max out their credit cards, empty their retirement savings, and destroy their financial futures. It's no wonder Donald Trump is being sued for fraud," Clinton said in a speech to the National Education Association earlier this month.

Right from the launch of her campaign last year, Hillary Clinton has been critical of for-profit colleges in general. Her "New College Compact" plan for higher education reform calls for a "crackdown on law-breaking for-profits" that includes stronger enforcement of "laws against deceptive marketing, fraud, and other illegal practices."

With a title like "honorary chancellor" one might assume that Bill Clinton accepted just a small token of compensation from Laureate.

The release of the Clintons' tax forms last year revealed that Bill had received $16.5 million from Laureate over the five years he served in the post. He resigned from the position April 24 of last year – less than two weeks after Hillary Clinton officially launched her Election 2016 presidential campaign.

Bill Clinton's work for Laureate entailed visits to 19 campuses and speaking to tens of thousands of students. The former president's prestige became a Laureate marketing tool, with his image prominently displayed on the website as well as posters on the campuses.

But Laureate is just the kind of for-profit college Hillary Clinton wants to target with a crackdown.

In Brazil, where Laureate took over Centro Universitario IBMR in 2010, the local government became alarmed enough to launch an investigation.

"They have turned education into a commodity that focuses more on profit than knowledge," Robson Leite, the Rio state legislator who led the probe, told Bloomberg.

It's not the only stain on Laureate's reputation…

Why Was Hillary Clinton So Quiet on Laureate for So Long?

A Laureate affiliate in Chile lost its accreditation in 2014, only earning it back in March of this year.

From Hillary Clinton's campaign rhetoric, you'd think the Laureate's questionable business practices would have concerned her. But as far as anyone knows, she had no problem with Bill's role in promoting the outfit.

Now it's possible that Hillary Clinton had no idea that Laureate was a bad apple, or that her husband was receiving millions of dollars to help promote the business – that was her excuse in the email scandal, after all – but it strains credulity.

In fact, the more you study the Clintons, the more their dual drive for political power resembles that of the fictional Frank and Claire Underwood in the Netflix Inc. (Nasdaq: NFLX) TV series "House of Cards." Both are inextricably intertwined.

Plus, Hillary Clinton does have a connection of her own to Laureate in the form of CEO Doug Becker, who donated $4,600 to her 2008 presidential bid as well as $2,000 to her campaign for a New York Senate seat in 2000.

A tangled web indeed. And yet Bill and Hillary's Laureate connection has gotten almost no attention from the mainstream media, particularly when compared to the coverage of Trump University.

Taking a step back, both the Laureate and Trump University issues illustrate once again why both candidates are so disliked and so distrusted.

American voters are so unhappy with these choices, in fact, that it actually makes possible a scenario in which neither Trump nor Clinton win the presidency in November. Here's how it could happen…

C'mon you guys! Do you want this country to be saved or not? Look, Trump I don't believe screws up because he wants to. He
Tried, and like most contractors , get sued all the time. I really don't believe he's ever
Out to screw people. On the other hand,
Who taught Hilary about Espionage, and
Tarmac! There is NO COMPARISON, NONE!
You all should be ashamed at yourself. You
Give Trump a little training in politics, and he might just become one of the best!

You have to be a good liar, to be elected to public office. But Hillary is better qualified in this regard, than The Donald.