When I started Total Wealth, I promised you that I would hold nothing back when it comes to the trades, tips, and tactics needed to maximize your wealth.

Today I want to keep that promise with a look at the lowball order.

We've talked about lowball orders before, but recent events like the Brexit make it abundantly clear that we need to revisit the subject. There's just too much opportunity being created not to!

This is a discussion you don't want to miss because lowball orders are among the simplest yet most powerful of all the Total Wealth Tactics we have at our disposal.

Not only are they a great equalizer when it comes to taking away the advantages normally enjoyed by Wall Street's biggest, most ruthless traders, but lowball orders allow you to buy only the stocks you want at precisely the price you want to pay.

You're going to love how easy they are to use and just how profitable they can be under conditions that have most people cowering in fear.

As always, I've got a fabulous trade to get you started…

Here's how to become a Market Master. 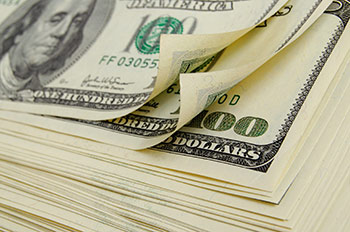 I've spent more than 30 years in global financial markets as a consultant, analyst, and trader, and that's given me some extraordinary insight into what it takes to make money. And I don't just mean small change, either.

I'm talking life-altering profits, and by that I mean the kind of money that will allow you to live the way you want, in a place you love with the people of your dreams… on your terms.

Success, you see, starts with something most investors take completely for granted: buying the right stock at the right price.

Right now that's a tough proposition… or so you would think. Conventional wisdom suggests that stocks are "expensive." The Brexit, Chinese growth, elections… the implication is that there are a whole host of things that could drive prices lower.

If that doesn't make sense, think about it this way.

Lowball orders are about buying stocks you want when they're put on sale at prices so low that other people view them as impossible.

To be clear, what I am talking about is NOT market timing.

Lowball orders are very carefully planned "profit-traps" that are laid out in advance. That makes them very different from the "buy and hope" strategies most investors use.

You set lowball orders in place ahead of time specifically to take advantage of conditions that favor you as opposed to the institutional traders who normally dominate the markets and whose express goal is to separate you from your money.

And big down days like those we saw following the Brexit vote are a perfect example of what I am talking about. Emotions are running high, and that's an engraved invitation for savvy investors.

But – again – only if you've planned ahead.

The Mechanics Are Simple

Lowball orders are technically "limit" orders. That's Wall Street-speak for an order to buy or sell shares at a specific price, or better. Unlike "market" orders, which go into effect the moment you place them, limit orders trigger only when prices reach the limits you've specified.

Whether that happens today, tomorrow, or six months from now, is moot.

You can afford to wait like a lion hunting prey in the savannah.

Placing lowball orders doesn't cost you a thing, and you're not risking one red cent until the order executes and then you're off to the races.

Take the Brexit, for example.

The markets suffered the largest two-day decline in recorded history following Britain's historic vote to leave the EU and some $3.01 trillion was wiped from global markets almost instantly as the Dow Jones dropped an unimaginable 870 points, according to MarketWatch.

Companies with any exposure to the UK whatsoever got shellacked and global stock markets followed, prompting many investors to panic and hit the sell button as part of a well-intentioned but entirely knee-jerk reaction.

I cautioned explicitly against that during several television appearances and, in fact, said buying was the better bet based on what we know about market psychology and the lowball orders we're talking about today.

Sure enough, the markets did. What's more, they actually tacked on new gains, too.

Anybody who bought in as I suggested on national television and in our sister services couldn't help but make some quick gains based on nothing more than the emotional recoil that inevitably happens when people realize the end of the financial universe wasn't upon them.

To be fair, you could argue (like many people do) that not every dip does result in a rebound, and you'd be right. Things "could be different this time."

Yet, that doesn't change market history.

We live in an era of incessant government meddling that guarantees a constant increase in liquidity. That, in turn, means more money chasing fewer quality stocks.

The only question is by how much.

In the old days, you could "buy the dips" and a 2.5% drop in a given trading session was about right. But now, thanks to computers that account for some 70% or more of daily transaction volume on the exchanges, the number needs to be about 5% to compensate for the increased liquidity I just mentioned.

Nick Colas of Convergex found that buying a single-session dip of at least 5% or more in the S&P 500 translates into a 19% average return within the next year and  – get this – a 75% return on average over the next five years. The older 2.5% threshold is still good, but results in only about 7% gains on average.

My own research agrees.

Unfortunately, here's the rub. The markets can go a long time without a 5% down day. In fact, we've only seen 22 of those days since 1957.

Which is why lowballs are such a powerful tool to have in your investing toolbox.

You can use lowballs to create your own opportunities, and you don't have to wait for specific market events that happen once in a blue moon.

Not in the past, not now, and certainly not in the future.

Here's a Lowball Order You Can Use Right Now

Becton, Dickinson and Co. (NYSE: BDX) has been a fabulous recommendation in our sister publication, the Money Map Report. Subscribers who are following along as directed have had the opportunity to capture gains of at least 100% and are now sitting on total returns north of 144%.

Newer subscribers who are scared they've missed out ask me all the time if "they can get on board."

Absolutely – and using a lowball order is a perfect way to do so.

Looking at the chart, it's apparent Becton Dickinson's stock goes in spurts. That means it's tailor-made for lowball orders because prices periodically drop to key support levels that give fresh money a terrific opportunity to push prices higher (again).

For example, BDX began a nice run in late September 2015, coming off lows of around $130 a share. By late December that year, it was trading at $156, and many subscribers feared they'd been left behind. 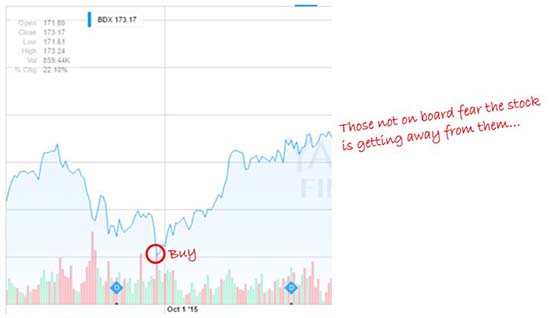 I knew the price was right because I heard from any number of people that "the stock will never drop that low," or that they'd "never get the chance." That's always a dead giveaway that you're on to something.

Honestly, I could've picked any number out of thin air, but I chose $135 because BDX's chart suggested that would be a logical place for short-term traders to fight things out even as longer-term investors made their move. Sure enough, BDX dropped to $129.79 by Feb. 8, sweeping anybody who'd entered a lowball order into the trade.

Today the stock closed at $173.17, which translates into a healthy return of roughly 33.40% in exactly five months. The S&P 500, by contrast, has turned in barely half that.

And if you're still not on board, or have just joined the Money Map Report?

The witch's brew of slowing global growth, low interest rates, ISIS, a strong dollar, and an impotent Fed all but guarantees more volatility ahead. You'll get your shot.

I suggest you consider placing a lowball order around $150 a share, because the same chart shows that's a key support/resistance level over the past two years, and another likely point at which the weak money will give up just like it always does when the markets panic.

Assuming you want to follow along, the lowball order you'll want to put in play with your broker or your favorite online trading platform would read as follows:

…that's "buy" because you're buying shares.

…"to open" because you're initiating the trade.

…"GTC" meaning good till you cancel the order, or it's executed.

At the end of the day, it doesn't really matter whether you are placing lowball orders as an investor or as a day trader. Your goal is the same – to profitably harness quick swings that drive most investors straight to the poorhouse.

Lowball orders work because every great company gets put on sale periodically for reasons that have nothing to do with the business case for owning them: Visa Inc. (NYSE: V), Alphabet Inc. (Nasdaq: GOOGL), Apple Inc. (Nasdaq: AAPL), and Gilead Sciences Inc. (Nasdaq: GILD), just to name a few.

There are no exceptions.

That's why it makes great sense to line up your share of profits ahead of time, and then wait for everybody else to panic and bring the prices to you on your terms.

And just when is that going to happen?

My guess is when Britain invokes Article 50 of the Lisbon Treaty. That's the clause that'll trigger negotiations that allow it leave the EU – something the markets don't think will actually happen…

…which is practically a guarantee that it will.

What is you opinion of those investors (institutional) that primarily invest (concentrate) in the top three sectors of the market based on Relative Strength and Momentum? So far this year, that's been Fixed Income (TLT), Precious Metals (Commodities), and U.S. Equities ( Primarily Utilities and Materials Sectors). I would very much appreciate your reply and point-of-view.