Cleveland police are prepared to go "Full Metal Jacket" at the GOP convention next week.

The department is finalizing its security plan for what could be the most violent political convention in history – one that would even surpass the 1968 Democratic convention in Chicago, which currently holds the title. That's when the National Guard and Army troops were mobilized after thousands of Vietnam War protesters descended upon the Windy City. Riots broke out. Chicago police reported 589 arrests and 219 injuries, nearly evenly split between protesters and police. 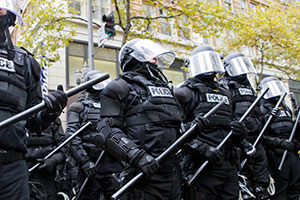 But that was almost 50 years ago, when police mostly carried batons – not guns.

Or tactical armor. Or rifle scopes – all items that suggest preparation for war.

And that's precisely what the Cleveland PD is prepping itself with, sparing no expense along the way.

In fact, the city of Cleveland has an epic $50 million receipt for the military gear it purchased.

You see, the Republican National Convention is designated as a "National Special Security Event" by the U.S. Department of Homeland Security, which allows military, federal, and local authorities to partner up in order to maximize law enforcement capabilities. Every political convention since 1998 has received this special designation reserved for public events at which both large crowds and dignitaries are expected to be present.

This year's GOP convention could be a major target for terrorists and violent protestors – more so now than ever before. After all, we're in the immediate wake of the July 7 police officer shootings in Dallas and, not long before that, a Republican rally resulted in multiple stabbings on May 28 in Sacramento, California.

Along with this beefed-up authority task force, the "National Special Security Event" label entitles Cleveland to a $50 million federal grant towards its security plan.

According to bids the city has posted to its website, the department invested in:

The city also put out a bid for tear gas, reported The Washington Post on June 19, as well as increased its protest insurance coverage from $9.5 million to $50 million.

Such security measures aren't unheard of – Tampa bought similar supplies plus spent $1.7 million of its $50 million grant fund to operate a 24/7 command center during the 2012 RNC.

However, this year, for the first time ever, the police force hosting the convention will be required to operate under an unusual condition…

The Feds Will Be Watching Cleveland PD at the GOP Convention

The Cleveland PD is being closely monitored by the Feds.

This makes Cleveland the first city to host a national political convention while under federal oversight. A series of high-profile shootings of young black men and women in 2013 — most notably, that of 12-year-old Tamir Rice – led to a federal investigation of the department's overall conduct.

As a result, the city signed a "consent decree" in March 2014 that mandated sweeping reforms within its police force over the next two years.

In light of concerns that the CPD will be too lax with violent convention attendees because of the oversight committee, Cleveland City Councilman and Public Safety Committee Chair Matt Zone think the police are doing everything just right. "We've been receiving kudos and acknowledgment," Zone said, according to CNN this morning, "so I'm just hopeful that something doesn't happen during this RNC that's going to cause that to really be a setback to the momentum that we're enjoying."

But not everyone holds the same conviction as Zone about the Cleveland PD's imminent behavior.

Joycelyn Rosnick, an attorney with the National Lawyers Guild's Cleveland office, has concerns that the Cleveland police will be too militant. Its purchase of 10,000 flexible handcuffs, she said, indicates they're prepping for mass arrests, reported Mother Jones today.

That level of military preparation alone concerned Jane Castor, who was chief of the Tampa Police Department when her city hosted the RNC in 2012. Castor told The Cleveland Plain Dealer in August 2015 that Cleveland's security procedures were quickly shaping up to look much different than those she'd imposed four years ago. For example, at the 2012 RNC, officers worked in standard police uniforms, passed out food and water to protesters, and arrested people only as a last resort, which resulted in all of two arrests.

But even just four years later, the world is "different" than it was before, former Boston police commissioner Ed Davis told The Boston Globe on March 19. "We're in a very different mentality in this country, and the potential for violence is high."

President Clinton's Iron Fist: The U.S. may soon be the land of the "not-so-free." SUVs will be banned because they're "ecologically unsafe." The NRA will be dismantled. Free speech on college campuses will be forbidden by law. At least that's how one FOX News host imagines America under a President Hillary Clinton…

How can you have a headline callling it the "most violent GOP Conevntion in history" … When It Hasn't Even Happend Yet ?!?! Irresponsible journalism. Sensationalism.
If it turns out to be so – then you can write a headline like that.
Just stupid.