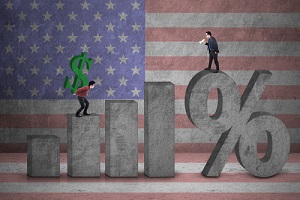 Roughly 287,000 jobs were created in June, leading many to wonder if a July interest rate hike was coming.

However, there is still a chance that we'll see one by the end of 2016.

Before we get into the odds of a rate hike in 2016, here's what has been holding back interest rate hikes the last several months…

In May, the United States only added 38,000 jobs. That was well below expectations of 175,000, and the Fed called it an "anomaly." The Fed partially blamed Verizon Communications Inc. (NYSE: VZ) because of a workers strike. It also blamed unseasonably warm weather allowing more work to be done during the winter, creating less need for spring-time construction workers.

Plus, the Fed didn't want to raise rates and add economic uncertainty ahead of the Brexit vote.

Britain has yet to leave the European Union, but the vote to leave has already had a significant impact:

Even though there is still economic uncertainty, the Fed seems dead set on raising interest rates. And here's when the markets think it will happen…

When the Markets Believe an Interest Rate Hike Will Take Place

Two other factors creating economic uncertainty have been volatile oil prices and the slowing of the Chinese economy.

Because of these issues, the Fed didn't raise interest rates in June. But the Fed has maintained it still wants two interest rate hikes in 2016. 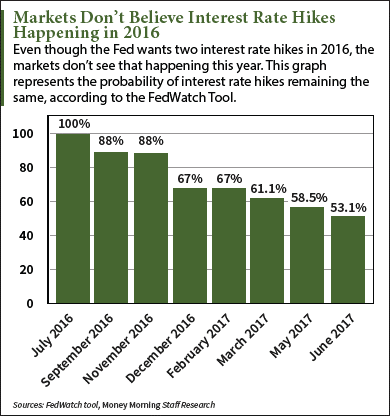 During the next FOMC meetings in September and November, 88% of investors believe interest rates will remain the same. Even in December, 67% of investors still feel rates are going to be exactly the same.

So while the Fed may keep telling investors it wants to raise rates, the markets aren't buying it.

The Bottom Line: The Fed wants two more interest rate hikes, but the economic uncertainty caused by the Brexit vote, volatile oil prices, and the slowing of the Chinese economy have the Fed on its heels. Investors overwhelmingly believe the Fed won't raise interest rates until June 2017.

Up Next: My Super Crash Manifesto