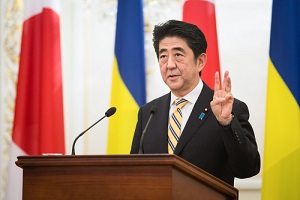 A stock market crash could be coming, courtesy of Japanese Prime Minister Shinzo Abe and the Bank of Japan (BoJ).

You see, Abe wants another round of fiscal stimulus, this one for reportedly $99 billion.

And one part of the BoJ's economic policy in particular could be the biggest catalyst for a stock market crash in 2016.

I'll get to that especially troubling policy in just a minute. But first, here's why Japan's prime minister has ordered this new round of stimulus.

On July 10, Japan held parliamentary elections. Voters showed overwhelming support of Abe and his politics, as his coalition party secured 70 out of 121 seats, according to CNBC.

These secured seats allow Abe to follow through with his economic plans. Known as "Abenomics," the 61-year-old prime minister built his 2012 campaign on improving Japan's stagnant economy.

Because the details in achieving Abe's plan are unconventional, it would be harder for him to push them forward without his party having control in the Japanese government. Now that he has the votes needed to pass bills and plans, he can further set "Abenomics" in motion.

Reuters believes that Abe could soon pass a stimulus package that could exceed $99 billion.

Increased stimulus for the world's third-largest economy may sound like a good deal on the surface. But there's a big reason why Abe's plans are setting us all up for an imminent stock market crash…

A Stock Market Crash Could Be Triggered by This Poor Decision

On Jan. 29, the BoJ cut interest rates from 0% to -0.1% to help grow the economy. This is what's known as a negative-interest-rate policy (NIRP).

In theory, NIRP is supposed to encourage economic growth. Commercial banks in Japan are charged a fee for depositing money with the BoJ. Instead of hoarding cash and absorbing the fees, Abe uses the negative interest rates to encourage more lending.

When more money is lent to individuals and businesses, there should theoretically be more money being spent in the Japanese economy.

But the problem is negative interest rates are just a theory. And testing a theory on the world's third-largest economy will not end well…

"It is a tactic with profound political and moral consequences that must be exposed as a betrayal of the social compact between governments and citizens," said Lewitt.

NIRP is so dangerous because it increases expenses for the banking sector. Banks could pass on negative-interest-rate charges by charging customers more for loans. But if loan demand is weak, banks are forced to eat the costs of negative rates.

And according to Bloomberg, loan growth in Japan slowed to its weakest pace in three years in March.

The other issue with NIRP is that even if banks did charge more for loans, customers wouldn't want to pay the fees. That means the banks have less money to lend, even if there was a higher demand.

The United States hasn't turned to NIRP yet, but low interest rates are having a major impact on banks. Over the last 12 months, Goldman Sachs Group Inc. (NYSE: GS), Bank of America Corp. (NYSE: BAC), and JPMorgan Chase & Co. (NYSE: JPM) are all down 23%, 20%, and 6%, respectively.

The Bottom Line: Negative interest rates in Japan are a huge catalyst for a stock market crash. Prime Minister Shinzo Abe has implemented a negative-interest-rate policy without considering the devastating long-term consequences. Any further signs of weakness from the world's third-largest economy could send markets into a free fall.

Next Up: How to Beat Wall Street at Its Own Game

Jack Delaney covers the global economy for Money Morning. Follow him on Twitter for updates on all the news that's moving the markets.