Before we get to that, here's a look at this week's price drop for gold…

Why the Price of Gold per Ounce Is Down Now

The gold price per ounce has been under pressure all week as investors pile back into equities and out of risk-off assets like gold.

The broad-based S&P 500 Index closed at a record Monday and continued to climb throughout the week. The Dow logged an all-time closing high on Tuesday. The Nasdaq entered positive territory on Tuesday after spending much of the year in the red. 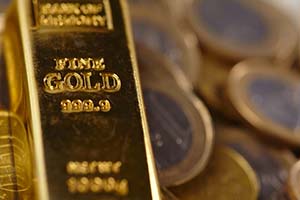 An earnings beat from JPMorgan Chase & Co. (NYSE: JPM) was one of the reasons the market opened up today. JPMorgan reported earnings per share of $1.55, handily better than the $1.43 expected. Revenue came in at $25.2 billion, comfortably better than consensus estimates of $24.16 billion. The Dow member was up 2.28% at $64.59 by midday.

Another headwind for gold prices Thursday was the BOE's announcement it left its benchmark interest rate steady at 0.5%. A 0.25% cut was expected.

Markets initially slipped on the news and then reversed when it became clear a rate cut is highly likely next month.

BOE officials said they expect to launch fresh stimulus on multiple fronts in August as the effects of the UK's decision to leave the European Union become clearer. The BOE noted the UK economy is slowing in the wake of Brexit. But the BOE decided to wait until August to move on rates so it has more data and better insight on the state of the economy. A rate cut next month will mark the first time since 2009 the BOE has cut rates.

The gold price per ounce experienced some added selling pressure after the BOE news.

While this has been a down week for gold prices, there are still major catalysts in the market that will continue driving the yellow metal. And one Money Morning expert just unveiled a new gold price prediction that is incredibly bullish.

You won't want to miss this triple-digit profit prediction…

Worries about volatility and the health of the global economy have driven gold prices 26% year to date.

And that's just the start…

Money Morning Resource Specialist Peter Krauth predicts the price of gold will surge 260% to $5,000 per ounce by 2020.

Some of the biggest reasons to be bullish on the price of gold include:

The marijuana industry has been neglected by investors for years.