On July 9, I wrote that major industry analysts had made a premature, and therefore dangerous, call to jump back into the "supermajors" - three of which are collectively spending around $45 billion to increase drilling - with both feet.

The thinking there is that these giants are diverse enough to have made it through the oil crash and are in position to capitalize on any price increases.

At the time, I said that any investor who acts on those recommendations will have leapt before looking hard enough.

Now, it looks like I was right. Over the past week or so, oil has become tightly range-bound, moving up and down in roughly equal measure. On July 13, for instance, New York-traded West Texas Intermediate (WTI) crude dropped 4.4%... after rising 4.6% the day before.

You could play those prices... if you were a professional futures trader. But for regular investors, that would be a hard dollar, indeed.

So let me show you the simplest, most profitable way to make money on oil in these narrow ranges...

Crude Is Moving Like a Ping-Pong Ball in a Shoebox

Here's what I mean. In the week since July 12, WTI has barely moved more than a dollar in either direction, making gains and giving them right back again. Its movements seem "stuck" in a tightly confined space.

Welcome to our latest period of range-bound oil. 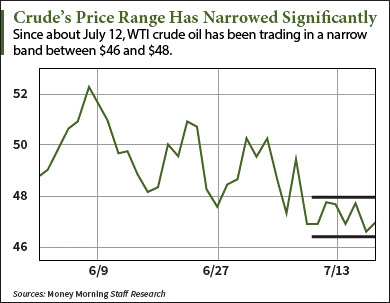 On June 23, WTI eked past $50 a barrel. Yet since then the price has declined 10.8% through close yesterday.

Now some observers had initially suggested there would be a rather straight line from $50 to the low $60s. After all, just about everybody - including myself - believes that is the level the market will realize in the fourth quarter of this year or the first of 2017.

Rather, this rise in price is going to be gradual and, as I have put it a number of times before, "ratcheted" going forward. In other words, the overall move up will be accentuated by occasional reversals.

In short, the crude oil situation is stabilizing but in a very different environment than we have experienced in the past. With the massive extractable oil largesse unfolding in several places, principally because of massive unconventional (shale and tight) oil in the United States, the supply side of the supply-demand balance is driving restraint.

Of course, the volume must actually be extracted at the wellhead before it has a genuine impact on market price, as I explained last week.

Nonetheless, traders who actually determine the daily prices via WTI and Dated Brent (the London equivalent) as the yardsticks for setting futures contracts tend to react ahead of the curve.

It's not immediately obvious to regular investors, because it takes place in another "dimension" in the markets, but I'll show you why this happens.

Understanding it is critical to making money in this price environment... 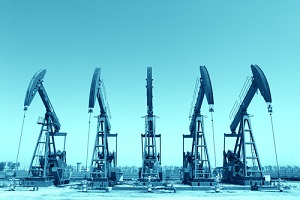 On any given trading day, there are many more futures contracts ("paper" barrels) than actual consignments of oil ("wet" barrels) circulating in the market. A trader makes money by arbitraging between these two.

As we have discussed before, traders need to estimate ranges of implied volatility upon which to determine options as "insurance policies" on the futures contracts. Futures require that one buy a commodity at a stated price and time. Options provide the right but not the obligation to do so.

Traders are almost never interested in owning the actual commodity - instead, their focus is on making a profit off of it. The options provide the leverage to sell the futures contract prior to expiration (by effectively cancelling out the contract).

That means traders will push the market in the direction it's already heading more aggressively than the actual underlying dynamics justify.

When that happens, your best bet is simply to "jump on the bandwagon" and do whatever the traders are doing.

Unfortunately for regular investors who aren't inclined to spend 24 hours a day glued to a trading terminal, that won't work when oil prices are range-bound and bouncing between two prices. Price movements are too small and too fast to catch.

And even if you did stay glued to your computer screen, you're (hopefully) most likely not involved in the futures contract trade, which is what the traders use.

But as luck would have it, there's a simple way to trade range-bound oil...

The tool I recommend you use are select exchange-traded funds (ETFs) or parallel exchange-traded notes (ETNs). These allow you to play an entire market segment without having to invest in the underlying commodities themselves, or in a multitude of individual companies.

In fact, ETFs and ETNs should be a part of your energy portfolio in any event. But they are even more important in the "bounded" trading environment we have in oil today.

When it comes to oil, there are two kinds of ETFs and ETNs to consider.

First are ones dealing with oil itself, as well as the direction of oil's price. There are also "bear" and "bull" funds, which magnify the movement of the oil price up to three times (in reverse, for "bear" funds).

As you'd expect, such funds are also subject to high volatility.

Second are a number of funds that provide exposure to a wide group of companies - according to function (for example, producers, oil field services, distributors, midstream pipelines and storage, equipment, refining), global range (broad global to region-specific), and size (small caps, blue chips).

A rule of thumb when using ETFs and ETNs in the present range-bound environment is this: It makes sense to stay away from funds that focus on small companies, especially given the acute debt crisis among operators underway in the U.S. market.

Broad exposure is preferable, with funds that have sufficient trading liquidity and low management fees.

If instead you're most interested in oil field services - the market segment that is likely to experience improvement first, before oil producers themselves - the fund to look at would be VanEck Vectors Oil Services ETF (NYSE Arca: OIH).

This is simply the best way to make money (while not glued to a computer) until we see crude prices move significantly more. You can be sure I'll be in touch when that happens.

Energy's biggest players need to be able to understand with absolute conviction which producers can be expected to weather these oil prices. So a special team I've created has been tracking real-time numbers from more than 45,000 data points covering 132 publicly traded oil and gas producers. This data is only available to massive institutional investors. But today, I'm releasing some of the most potentially lucrative information from our proprietary data to regular investors, so they'll have the chance to bank life-changing gains. Click here for my briefing.