With a majority of voters saying they're unhappy with the two major-party candidates, America may be ripe to consider a third choice in 2016 — Libertarian Party candidate Gary Johnson. 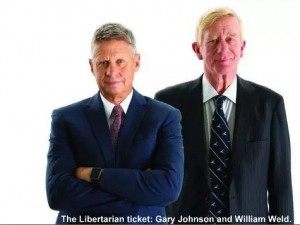 That's the same time spent in an elected office as Democratic presumptive nominee Hillary Clinton, who served eight years as a senator from New York (of course, Clinton also served four years as U.S. Secretary of State, an appointed position).

Why the Libertarian Party Has a Rare Opportunity

A New York Times/CBS poll, taken from July 8-12, found that voters had an equally unfavorable view of both Clinton and Trump – they tied at 54%. Two out of three voters (67%) don't consider Hillary Clinton honest and trustworthy, while 62% don't think Donald Trump is honest and trustworthy.

How Negative Interest Rates Will Finally Kill America's Free Market: The Fed never lets real data get in the way of a bad decision – which is why investors must prepare for negative rates now. Here's what you can do…

Missouri voters are so unhappy with the two main choices that in a recent Public Policy Polling poll, 12% said they'd prefer a "giant meteor hitting the Earth" to voting for either Trump or Clinton.

The giant meteor option won't be on any ballots in November, but Gary Johnson will – for most, if not all voters. The Libertarian Party has secured ballot access in 36 states so far and has a good chance to make all 50.

But assuming you can vote for the Libertarian ticket, the next question is whether you should.

Why a Libertarian Vote Is Not a Wasted Vote

Of course, the cynics will argue that voting Libertarian is a "wasted" vote. That thinking assumes each voter needs to have a shot at casting the deciding vote for their vote to "matter." But most states are decided by large margins known in advance. By that logic, voting in states like California, New York, and Texas is a waste of time.

No, the essence of democracy is that every voter casts their ballot for who they think is best for the office. That could be Trump, Clinton, Gary Johnson, or even Green Party candidate Jill Stein.

Voters who don't want to vote for Trump or Clinton owe it to themselves to vote for someone else, and Gary Johnson happens to be the most obvious alternative.

A Guide to the Libertarian Party Platform

The Libertarian Party doesn't fit neatly into the left-right spectrum we've grown used to from the endless squabbles between the Republicans and Democrats.

The shorthand version of the Libertarian platform is "fiscally conservative and socially liberal," a political mash-up that's probably closer to where the average American voter falls.

The guiding principal of Libertarianism is personal freedom. In other words, the less government the better. Here's how that plays out with respect to the issues:

A Scary Lesson from 1896 on Big Money in Politics: The rapid increase of big money spending on political campaigns in recent years has raised concerns that the rich are "buying" elections. It's a valid concern because it's happened before. Here's how big money bought a president 120 years ago…

For voters who find themselves agreeing with much of the Libertarian platform, one more question remains: How can Gary Johnson possibly win?

While the Libertarian ticket almost certainly can't win the 270 electoral votes required, a quirk in the U.S. constitution opens a crack of a possibility.

Here's how Gary Johnson could end up the White House…

"Taxation: Libertarians favor the repeal of the income tax and the abolishment of the Internal Revenue Service."
– Gary Johnson says he would do this if he could "wave a magic wand" and would sign the Fair Tax bill which is currently in congress were it to make it through congress and to his desk. He acknowledges that the President doesn't have the power to simply make such a change and it would have to be a bill passed through congress.

Immigration: The Libertarian platform calls for free migration across borders, with exceptions for "foreign nationals who pose a credible threat to security, health, or property."
-Gary Johnson wants to implement an easy to obtain work visa program as a way to track and tax immigrants coming over for available jobs. The idea is that immigrants would choose to go the route of an easy work visa program rather than the dangerous experience of crossing the border illegally.

Johnson lines up pretty well with the other issues that you listed. Not at all trying to be snarky, I just want to make sure that people get all the correct information about Gary Johnson. Thanks for writing this informative article.

Donald Tramp is an outsider, and that Is best card to have, deferent from the politicians.