Editor's Note: Bill's paid-up subscribers have been enjoying outsized gains (even for gold) on his favorite yellow metal play. Gold exposure doesn't get much better than this, so now he wants to share it with everyone so they can reap even bigger gains down the road. Here's Bill...

We're just over halfway through one of the most exciting, dramatic market years in living memory.

Between the extreme volatility that marked the first few months and the financial bloodbath of the Brexit vote, it's been a gladiatorial fight to the death for investments to keep their heads above water.

Unless you're in gold.

It's already the "Winner and World Champion" of the post-Brexit market, thanks to a truly global flight to safety.

But now I think it's time we take that a step further.

Within the past two weeks, the yellow metal hit two-year highs, while bond yields hit all-time lows, as world markets were caught in a protracted reaction to the Brexit. Gold has pulled back just a bit, but this is some of the clearest confirmation yet that we're in a fresh new gold bull market.

Since the start of the year, the precious metal has shown returns above equities, Treasuries, investment-grade bonds, currencies, and major stock indexes in both emerging and developing countries.

But here's what really makes this stock the "Market MVP"... 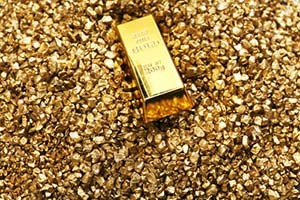 There's no denying it's been a stellar seven months for gold investors.

The metal has surged to peak gains of 26%, its best first half of the year in more than a generation.

And if you talk to some of the savviest analysts in the industry, this rally is just getting started.

Joni Teves, a UBS analyst, estimates that with all of the macroeconomic uncertainty plaguing the markets, gold could easily climb to $1,400 an ounce in the short term.

These macroeconomic uncertainties, Teves writes, "justify strategic gold allocations across different types of investors," encouraging hesitant investors who have been waiting for the dust to settle to participate.

Already low bond yields around the globe have fallen even further in the Brexit's wake, many of them hitting fresh all-time lows, including yields in the United States, the UK, Germany, France, Australia, Japan, and elsewhere. For the first time ever, Switzerland's entire stock of bond yields has fallen below zero, with the 50-year yield plunging to -0.03% on July 5.

Canada's 30-year bond yield also plunged to a record low, as did yields on the 10-year and 30-year Treasuries.

About $10 trillion worth of global government debt now carry historically low or negative yields, which are creating "negative growth" in the world economy, according to billionaire "bond king" Bill Gross.

But that's only one of three key reasons why gold is set to continue its impressive climb throughout the second half of the year.

Let's take a look at the other two...

And Teves isn't the only analyst who's bullish on gold...

Jeffrey Gundlach, chief executive of DoubleLine Capital and the "new bond king," said last week that gold remains the "best investment amid fears of instability in the European Union and prolonged global stagnation, as well as concerns over the effectiveness of central bank policies."

"Things are shaky and feeling dangerous," Gundlach, who oversees $100 billion at the Los Angeles-based firm, said. "I am not selling gold."

Fact is, we've already had three major swoons (last summer, the beginning of 2016, and post-Brexit) in which U.S. stocks were clobbered, only to see the indexes regain their losses and then get stuck in a holding pattern once again.

But this has not been the case for physical gold, which has been seemingly unstoppable since the beginning of the year.

And the opportunity doesn't stop at physical gold...

The Miners Outshine Even the Metal

Truth is, the year-to-date gains for miners that produce gold have been even more incredible.

Of the 28 gold-mining stocks with a market valuation of at least $300 million, every last one is outperforming the Standard & Poor's 500 Index.

I don't say this often, and I don't say it lightly, but you could have literally thrown a dart at gold miners in 2016 and picked a winner.

I put my Private Briefing readers in one of my favorite miners back in February 2016, and they've enjoyed gains of 25% so far, with lots more expected.

Now, before the serious gains start, I want to share this with everyone.

The stock is Goldcorp Inc. (NYSE: GG), the lifelong dream of its visionary founder Rob McEwen. Thanks to its adept, industry-beating use of technology and new mining techniques, it's the best way to get paid whenever gold surges forward.

Recent high operating costs were responsible for a lack of investor interest in late 2015. But after a series of savvy moves, Goldcorp is coming back.

Management plans to cut $500 million in mine-site costs and corporate expenses over the next two years. The company is also ramping up output at two new production sites that began commercial production last year.

And its balance sheet remains impeccable. The company is carrying $2.7 billion in debt and has more than $3.2 billion in available liquidity.

But here's the thing: Gold has just started clearing its throat. Even with those impressive gains, we're only in the beginning stages of a bullish gold market, and that means this historic gold miner has a bright (and extremely lucrative) future on the horizon.

More from Bill: Check Out What These 7,524 Big Investors Are Buying Now

Bill has been carefully studying the SEC Section 13(f) filings of some of the heaviest hitters on Wall Street to find out - in advance - which stocks they're going to play for huge potential gains. When these whales move in, the stocks they buy could potentially soar. Recent buys have surged 1,135% in seven days and 1,400% in a little over five months. Click here to learn more.