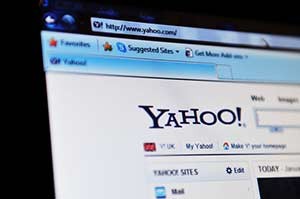 The Yahoo! Inc. (Nasdaq: YHOO) stock price is up nearly 15% in 2016 as the list of potential bidders for its core business narrows. Shares of Yahoo stock are also up 0.6% to $38.18 today (Tuesday, July 19) despite the company's disappointing Q2 earnings report.

With all of this news, investors want to know if the YHOO stock price can keep climbing ahead of its imminent sale.

Before we get to the YHOO stock price outlook, here's a look at Yahoo's Q2 earnings report released after market close yesterday…

Revenue came in at $1.31 billion. That was up from $1.24 billion in Q2 2015 and better than the $1.08 billion expected. Yahoo CEO Marissa Mayer said the strong revenue increase came from managing expenses, which included cutting 2,100 jobs over the last year.

Yahoo's Q2 earnings report will most likely be its last one as an independent company. The company is reportedly in the end stages of reviewing and accepting bids for the sale of its core business.

Mayer has stated she believes the right transaction could unlock huge value for the company. Yahoo did not share any details about the looming sale during its Q2 earnings call. But Mayer noted the process is indeed moving ahead.

According to CNBC and Bloomberg, the number of Yahoo suitors has been narrowed down to three. They are Verizon Communications Inc. (NYSE: VZ), Quicken Loans founder and Cleveland Cavaliers owner Dan Gilbert, and Vector Capital Management.

A decision could be made within a week, but one obstacle stands in the way of the bidding war winner…

Bloomberg reported Yahoo may decide to sell its intellectual property separately. [Editor's Note: The absolute best way to get rich is by investing in tech stocks. And this tech subsector will lead those huge returns in 2016.] The company has received bids on its patents, including one from a group of smaller firms that collect intellectual property for royalties. The patents will likely sell for less than $500 million yet could fetch up to $1 billion.

All of these offers fall within range of the valuation of Yahoo's core business, which is between $4 billion and $6 billion.

Here's a breakdown of the rest of Yahoo's business units…

Because tax details make it difficult to value shares in Alibaba and Yahoo! Japan, Barron's in April said a conservative estimate for Yahoo's net asset value is $43 per share. As of 12:50 p.m. today, the YHOO stock price was trading at $38.18.

That means YHOO shareholders would hypothetically see an instant 12.1% gain if the firm was bought for $43 in an all-stock deal today.

Stay tuned to Money Morning for more coverage on the Yahoo sale's effect on the YHOO stock price.