Access Your Profit Alerts
Sign Up for Money Morning and get your free report:
"The Best Stocks to Buy Now"
How to Buy Bitcoin
Twitter
Stocks: DOW 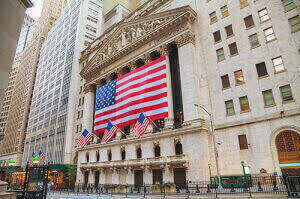 Dow Jones Industrial Average News, 7/19/2016: The Dow Jones was swinging between the black and the red on Tuesday after Goldman Sachs Group Inc. (NYSE: GS) posted earnings for Q2.

The investment firm beat Wall Street forecasts with earnings per share (EPS) of $3.72 and revenue of $7.93 billion.

Trending News: What Nobody Gets About the "Oil Gut"

It's another busy day of earnings reports… and the markets are resilient – even as analysts continue to set remarkably low expectations for companies.

While earnings will top headlines today, there are a number of profit opportunities that investors should consider before the opening bell.

Dow Jones futures projected a four-point gain as investors prepare for a busy day of earnings reports. The Dow doesn't want to push much higher as it awaits more insight into the timing of more stimulus from central banks around the globe. The European Central Bank (ECB) meets this week to discuss additional financial stimulus later this fall. The markets have been pushing higher since Japanese Prime Minister Shinzo Abe won an election last week and immediately ordered a fresh round of stimulus. But even with new stimulus, there is one policy by Abe that could trigger a stock market crash.

Johnson & Johnson (NYSE: JNJ) topped Wall Street earnings expectations and the firm hiked its full-year guidance. JNJ stock is up 2.4% after the company said it's been able to boost profitability despite currency exchange concerns.

Meanwhile, UnitedHealth Group Inc. (NYSE: UNH) announced that it had beaten earnings expectations. Shares of the insurance giant were flat in pre-market hours after the firm reported positive gains from its pharmacy benefits business.

The Republican National Convention continues today in Cleveland, Ohio. The first day was off to a tumultuous start after the wife of front-runner Donald Trump has been accused of plagiarizing portions of her speech. According to multiple reports, Melania Trump's speech contained a large chunk of text that resembled portions of a previous speech by current first lady Michelle Obama. Trump is expected to accept the GOP's nomination on the final day of the convention, July 21. More events like this have many people wondering if they should vote Libertarian in the 2016 election. Here's a primer on the Libertarian ticket.

Investor Alert: Terror and Chaos Can't Stop the Markets, but I Know What Will

Oil prices were ticking higher as traders reduced anxiety about oversupply issues. The markets are growing more optimistic that China is set to boost its oil imports after the nation completed a round of refinery maintenance over the last few months. WTI crude oil prices were up 1.0%, while Brent crude oil prices added 1.1%. Here's the best way to play oil prices right now.