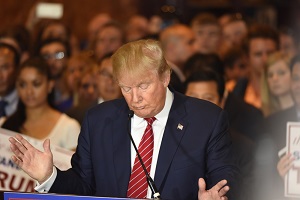 Last Friday (July 15), several mainstream media sites jumped aboard the "Donald Trump tax evasion scandal" train when news broke that the GOP presidential nominee and his family were part of a lawsuit.

A few fashioned their headlines to read as though Trump was named as a suspect:

And one site outright made Trump and his family out to be criminals:

These headlines are categorically untrue.

Here's what the mainstream media is getting wrong…

Yes, Donald Trump and two of his children, Donald Jr. and Ivanka, have been named in the lawsuit…

As witnesses. Not as suspects.

The actual suspect in the case is Felix Sater, who used to work for Trump.

The Highest Bidder Wins… the Presidency: When you head to the polls in November, our next commander in chief will have already been picked. Wealthy bidders have long been at work exploiting loopholes to funnel "dark money" into the election. Here's how they'll decide who's boss…

Sater became well-known in 2007 when news broke that, in the late 90s, he'd secretly pleaded guilty to swindling stock investors out of money that he'd funneled into his own bank accounts and into the mob's coffers. This had been kept under wraps for nearly a decade in exchange for his guilty plea because, well, you don't really want the mafia to know you've squealed.

Now, in spite of the criminal charges against him, Donald Trump hired Sater in 2009 to be his senior adviser when it came to real estate projects. Maybe not the best decision to make, but Sater worked directly for the GOP presidential nominee for only six months.

Sater's job during that time was to prospect for high-end deals for the Trump Organization, which led to the development of four Trump-licensed projects in which Sater and Trump were named as partners.

This is where Donald Trump's connection to the lawsuit comes in…

Trump reportedly received tens of millions of dollars in fees and partnership interests from those four development projects. So did his son Donald Jr. and his daughter Ivanka.

There is nothing illegal about that. In fact, that's exactly how revenue is generated in business partnerships – via interest allowances and fees.

Because the profits are supposed to be reported as going to the partners personally, partnerships are not taxed and are rarely audited.

However, partners are liable to tax when they take out their share of the interest- and fee-generated profit while receiving other transfers from the partnership free of charge.

And that's what Sater allegedly did… via his own company.

Sater's business, Bayrock Group LLC, is purported to have run and controlled the tax evasion system. The lawsuit against him describes it as a simple RICO (Racketeering Influenced and Corrupt Organizations Act) scheme of interlocking partnerships that underpaid New York taxes alone by at least $7 million.

As to whether Trump and his children profited from Sater's shifty practices as one-time partners – well, that's as of yet unknown. But it could be why the billionaire businessman hasn't released his taxes.

Regardless, the media has sure pegged Trump as guilty…

Occupy Democrats tried to justify their misleading headline about Trump facing tax evasion charges by claiming that a "material witness is a secondary suspect to a crime."

But this case is actually a civil lawsuit and not a criminal proceeding.

The word "charged" doesn't even apply.

But there is a word that applies to Occupy Democrats' careless headline: "Libel."

China-U.S. relations have become a central part of Donald Trump's platform since he announced his candidacy on June 16, 2015.

Specifically, the reality TV star has homed in on the Red Dragon's shady trade practices.

And he intends to put a stop to them.