Veteran sailors and tech investors have one important quality in common.

They understand how to navigate choppy conditions.

That shared insight is something I know about firsthand. You see, I've been racing sailboats and covering Silicon Valley for close to 35 years.

In recent years, I even found a way to combine those two loves: Though I eventually traded the rigors of racing for the simple joys of cruising, I now manage to go sailing on a regular basis with a couple of tech-investing pros – including one who's a daily denizen of "the Valley."

During one outing, we traded stories about battling whipping winds and four-foot-and-higher waves. And we talked about the market.

And here's what we all agreed on: Despite the Dow Jones Industrial Average and S&P 500 Index reaching record highs last week, the choppy seas we've seen in the markets for the past 18 months will continue for at least the near future.

But that doesn't mean you should stay tied up at the dock.

Our goal here is to show you how to build wealth using tech investments.

Today I'm going to show you how to keep it…

Five Moves That Will Calm Your Nerves 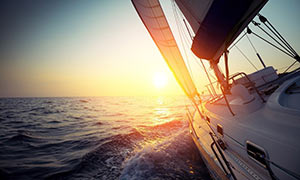 Look, I can understand why investors are feeling a bit rattled right now.

First, you have the threat of an increase in interest rates – when we all know that cheap money and low rates have been two of the biggest catalysts behind this bull market.

Then, you have those record highs in the S&P 500 and Dow Jones. That sounds good, but we all know that many investors are worried that any bad news could cause them to teeter.

And there's plenty of potential bad news out there that could send shares dipping: a presidential race utterly unlike those we've seen before, police shootings and the resulting near-riots, the post-Brexit fallout in the United Kingdom and Europe, an overstated but real economic slowdown in China, continuing low oil prices, and unrest in the Middle East and, potentially, the South China Sea.

But don't worry – I approach tech investing the way I skipper a sailboat. For instance:

A lot of folks may ask: "If you know there are risks, why leave the dock at all?"

That's a good question. And I had some very good answers.

For one thing, while you may suspect certain risks are present, and may even fear them, you never really know when they'll show themselves.

Sometimes the things you most fear never happen. And when you let fear paralyze you, some pretty terrible things can result. In sailing, if you stay tied up at the dock, you never reach your destination.

The same is true with investing. At Strategic Tech Investor, our goal is to help you avoid the plight of so many Americans who have zero net worth.

But if you stay out of the market, you can't reach that destination, either.

In fact, if you sit on the dock and stare at your boat because you're worried about the choppy seas, the damage your finances can suffer is irreversible.

But the same "missing the best days" precept holds true for tech stocks as well as for the overall market.

In the past, I've told you about the rules in my five-part strategy for building wealth through tech stocks. These five tips help you keep that wealth.

The goals here are to ride out the choppiness and not risk missing those "best days."

To manage your risk and achieve these additional goals, you should look to…

This is a powerful way to reduce risk from a correction but still catch a good part of any rally. Let's say you have $100,000 in the market and in normal times limit any position to 5% of your capital. If your risk worries are rising, you might cut that position-sizing figure in half to 2.5%, or $2,500.

Smooth Sailing Tip No. 2: When in Doubt, Start with "Test" Shares

In the above example you might make an initial entry of, say, $500 – just to make sure you've timed your entry correctly, which is hard to do in volatile markets. You can then add to your position as the stock advances.

If you've ever read the investment classic "Reminiscences of a Stock Operator," which is a fictionalized account of real-life trader Jesse Livermore, you'll recall that this was a tactic the big-time trader greatly favored.

Smooth Sailing Tip No. 3: Use Stop-Losses

There are two ways to employ these essential portfolio tools. The first is a stop-loss that protects against losses getting too deep. I suggest a stop-loss of no more than 20%.

The second method is a "trailing stop" to protect gains. This is one that moves up as the price of the stock advances. Use the same 20% figure in this manner. Let's say you bought a stock at $15 that's gone up by two-thirds to $25. Put in a trailing stop of $20. That way you get out with profits of 33% no matter what happens.

This is a great way to take gains off the table and still go along for the ride. It works like this: When you are up 100% on a stock, sell half. That way you recoup your entire investment and are "playing on the house's money," as we like to say.

Then use a trailing stop to protect profits on the remaining half.

Smooth Sailing Tip No. 5: Stay in the Market

If you want to reduce your exposure, that's fine, but don't cash out altogether. I know a "very savvy trader" who got scared last August and sold all his stocks. Since then, the market has rallied some 21%.

He left a lot of money on the table. Had he cut his holdings in half, he'd still be sitting on overall gains of 10%. You can always shift some of your capital into exchange-traded funds (ETFs).

In June, I shared with you three ETF profit screens you can use when searching for a fund to buy. And I showed you how the iShares North American Tech ETF (NYSE Arca: IGM) – despite its low volume – can greatly reduce your risk and still give you the chance to double your money.

In the meantime, I actually do see a lot of positive signs for the overall market – and for tech in particular.

Key sections of tech continue to do very well. The sales of mobile devices are holding steady, and firms involved in data storage, cybersecurity, customer relationship management, and supply-chain tech are raking in the cash.

On the strength of those trends, semiconductor stocks have staged a solid rally this year. The Market Vectors Semiconductor ETF (NYSE: SMH), a good proxy for the sector, is up nearly 33% since mid-February.

That's about double the market's 16% return.

And remember, one of our my main missions at Strategic Tech Investor is to help you employ investing rules and tools needed to both make money and protect your portfolio.

If you employ the tips I've shared with you today, you'll get through any challenging markets with profits intact.

I'm confident of that.

Up Next: As Gene Therapies Disrupt Big Pharma, Here's How to Get Your Piece of the Action