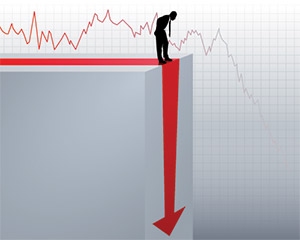 There's no way to avoid it: Money Morning Global Credit Strategist Michael Lewitt believes we are headed directly for a stock market crash.

It's true that the Dow Jones Industrial Average and S&P 500 are setting record highs right now. But the irresponsible fiscal policies of central banks and corporations using debt for speculation are fueling an impending economic downfall.

The problem, though, is you will only find headlines propagating the new renewed strength and health of the U.S. economy. You will find very few analysts, like Lewitt, telling you the truth.

That's why today, we're showing you how to protect your portfolio ahead of the impending stock market super crash.

But first, we want to make sure our readers know exactly why we are headed for this unstoppable market crash.

Lewitt says over the last 30 years, the world has "gorged out on debt in a massive debt supercycle." Today, there is more than $200 trillion of public and private debt outstanding in the world.

On top of that, there is $600 trillion tied up in derivative contracts globally right now. Derivative contracts include collateralized debt obligations (CDOs), which encompass mortgages and credit default swaps. CDOs were a major contributor to the 2008 financial collapse.

And the central banks aren't making the markets any safer…

With interest rates near zero, the U.S. Federal Reserve isn't able to do much more to stimulate economic growth. But even more concerning is that the Fed will be unable to bail out the markets when the debt bomb explodes.

"The Fed has already fatally mismanaged this credit cycle, and cowardly interest rate moves in either direction won't change any of the underlying issues," Lewitt said.

All this means we are headed straight for a $200 trillion stock market crash. So to protect yourself, these are the two investments you need before the bear market starts roaring…

The Best Portfolio Protection Ahead of a Stock Market Crash

The first investment to make ahead of the crash is gold, Lewitt says.

"Gold is key because it is the only asset that protects against both inflation and deflation," Lewitt says.

And it appears that billionaire investors are heeding Lewitt's warning…

The second investment to protect your portfolio ahead of a stock market crash is cold hard cash.

Lewitt suggests cash should comprise 10% to 20% of your portfolio.

Cash isn't considered the most exciting asset. But in terms of protection, Lewitt believes it's absolutely vital. If a stock market collapse occurs, cash holds its value much better than other assets inflated by debt, like real estate and stocks.

The U.S. dollar also allows investors to profit in times of uncertainty. Having a stockpile of cash allows you to purchase stocks and other assets at cheaper prices when sellers panic or are forced to sell.

Lewitt recommends keeping your cash in one- to three-month Treasuries. If you do keep your money in a bank, he suggests banks without exposure to derivatives, like Fifth Third Bank or BB&T.

While those are ways to stay safe, Lewitt has also discovered three profit opportunities connected to the debt crisis. If you followed his advice back in October on this one company, you could have made gains as high as 700%. But he still sees plenty of profits ahead.

The Bottom Line: With the Dow moving towards record highs each day, the mainstream media is avoiding the signs of a stock market crash. Risky derivatives and $200 trillion in debt will eventually wipe out the value of many Americans' portfolios when the market crashes. But you can protect yourself with gold and the U.S. dollar.