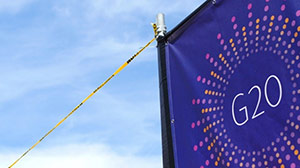 The G20 Summit is upon us again.

Yes, the financial heads of 20 leading global economies will meet this weekend, July 23-24, for the third time in 2016.

Expectedly on the finance ministers' agendas will be the Brexit fallout, as well as growing military tensions in the South China Sea. That's because the purpose of the G20 is to study and discuss global issues that could affect international financial stability.

Yet, there's one topic that may deviate from that goal: 2016 GOP presidential nominee Donald Trump.

That's because U.S. Treasury Secretary Jack Lew will be there. Lew's not a fan of the Republican leader, and he's about to use the G20 to make that clear, along with a few other global leaders in all likelihood.

Now, Lew has only indirectly criticized Trump in the past...

On April 11, Lew published an op-ed in Foreign Affairs bashing the "America first" philosophy when applied to world matters. He argued that the United States would be ill-advised to pay heed to the isolationist tendencies that have cropped up throughout its history and - more urgently - during the current presidential campaign.

Then, on May 10, when Financial Times asked Lew for his thoughts on Trump's plan to "borrow more if the U.S. economy crashes," Lew said he would not comment on "anything that anyone is saying on the campaign trail..."

But then he kept commenting:

"As someone who for the last three-plus years has been responsible for managing our federal debt," Lew said, "we have the deepest, most liquid market in the world for U.S. Treasuries, and that's based on the fact that for our entire history it has been a very high priority to treat the servicing of our debt as a responsibility that we have to take very, very seriously."

While Lew didn't exactly drop Trump's name in his remarks, his feelings about the bombastic billionaire are unmistakable: He doesn't like him.

More of these kinds of comments from Lew are sure to come at this weekend's summit. In fact, he's already started making them...

Pre-G20 Summit Trump-Bashing Brought to You by Jack Lew

At a joint press conference with French Finance Minister Michel Sapin on July 12, Lew reiterated that the G20 must focus on ensuring the benefits of global trade are shared broadly among citizens.

"We also need to do a better of job of explaining why this cooperation is important to the lives of our citizens in terms of jobs, economic growth, and stability," Lew said, according to Reuters yesterday.

Lew's comment was a critique of Donald Trump's well-known strict stances on trade and globalization. Trump has garnered support by:

The Treasury secretary wants to put a stop to this kind of protectionist talk. He said as much in his Foreign Affairs op-ed.

So he'll surely use his time at the G20 Summit to spread anti-Trump sentiment while assuring America's financial allies that our economic goals are indeed aligned with theirs.

After all, China warned the U.S. about Trump's rise in popularity way back in February after he took Nevada's primary.

And just last month, on June 30, French President Francois Hollande claimed that a President Trump would be a dangerous result that would "complicate" relations between Europe and the United States.

But, hey, Putin likes him.

Up Next: Here's Why China - in Spite of Trump's Harsh Criticism - Is Secretly Cheering on the Real Estate Mogul