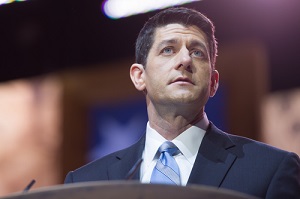 After reading Paul Ryan quotes about Donald Trump, let's just say you'd never accuse the two of being best friends. Ryan's July 19 speech during the Republican National Convention offered more negative commentary on Hillary Clinton than it did positive support for Trump. In fact, this was the only directly pro-Trump comment Ryan made:

"I don't know where Joe Biden and Barack Obama will be, but you'll find me right there on the rostrum with Vice President Mike Pence and President Donald Trump."

In the entire 12-minute speech, that was it.

Ryan wants Republicans to have control at all costs. But he still hasn't completely warmed up to Trump -- even though he officially endorsed the real estate mogul on June 2.

That's why we're doing a little reading between the lines to decipher what Ryan really thinks about the 2016 GOP nominee for president.

Paul Ryan Quote No. 5: "Who's with The Post here, by the way? Is DeBonis here? Kane's here. Okay, last question."

This ultimately shows Ryan's true feelings on Trump. But first, it requires a little bit of backstory to understand the significance...

At a news conference on June 16, Ryan was asked what he thought about Trump's move to block The Post.

"I don't know a whole lot about it," Ryan responded. "I hope and assume this will get worked out."

His initial response wasn't anything worth taking note of. But then Ryan asked, "Who's with The Post here, by the way? Is DeBonis here? Kane's here. Okay, last question."

This sends a clear message that while Ryan may be forced to endorse Trump for the sake of the Republican Party, he will not put up with or support his antics.

Paul Ryan Quote No. 4: "It's not what this country stands for."

In December 2015, Trump wanted a "total and complete" ban on Muslims entering the United States.

"Until we are able to determine this problem and the dangerous threat it poses, our country cannot be the victims of horrendous attacks by people that believe only in Jihad and have no sense of reason or respect for human life," Trump said.

Ryan agrees there are issues with our immigration system. On his government webpage, Ryan calls the immigration system broken. He says we don't know who the 11 million undocumented immigrants are or what activities they are involved in.

But where he differs from Trump is his focus on improving the legal immigration process as a means to help not only improve national security, but also to bolster the economy.

Ryan is focused on the role immigrants can play in helping to aid U.S. economic growth, while Trump stresses legal immigration. However, we found this loophole that would totally undermine Trump's plan to build a wall...

Breaking Story: The FBI Knows Every Detail of What You're Doing

Paul Ryan Quote No. 3: "It is my hope the campaign improves its tone as we go forward and it's all a campaign we can be proud of."

Ryan has come to terms with Trump being the GOP nominee. He had to.

But he's still stuck in a tough spot...

You see, influencers within the Republican Party are looking for outside choices for the next POTUS. In a May 4 Facebook post, Sen. Ben Sasse (R-NE) stated that conservatives will need to find a third option if Trump ends up as the GOP nominee.

Neoconservative political analyst and founder of the Weekly Standard, Bill Kristol, is also pushing for a third-party candidate.

Ryan may not be particularly fond of Trump, but he has to get support around him to make sure the Republican Party enters the White House after the elections.

That can't happen if some Republicans decide to vote for an alternative candidate.

Paul Ryan Quote No. 2: "There are a lot of questions that conservatives, I think, are going to want answers to, myself included."

One issue that weighs on the minds of conservative voters is Trump's affiliation with the Democratic Party.

You see, Trump was a registered Democrat from 2001-2009. Past comments on how the economy functions better under Democratic leadership and previous support of Hillary Clinton are cringe-worthy for conservatives.

Paul Ryan Quote No. 1: "Do I think Hillary Clinton is the answer? No, I do not."

Context is important here. Ryan may not be a fan of Trump. But this quote shows the Speaker of the House is supporting who he believes to be the lesser of two evils and the person who will help Republicans gain control of the White House.

Just a week after Ryan finally endorsed Trump, the real estate mogul created another media storm. He declared a judge of Mexican heritage who was presiding over his Trump University lawsuit biased because of his heritage.

When prodded on whether he laments his choice to support Trump, Ryan simply stated, "I regret those comments he made."

That's when he further went on to say that Clinton is not the answer.

Will Paul Ryan and Donald Trump ever get along? Let us know on Twitter @moneymorning and Facebook.