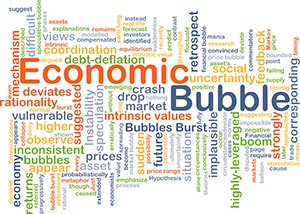 Economic bubbles always seem to stare us in the face before popping.

That's exactly what happened 10 years ago with the boom-turned-bust U.S. housing market -- and it's what could soon happen with global corporate debt...

According to a new report from Standard & Poor's Global Ratings, corporate debt around the world is massively on the rise and could skyrocket to $75 trillion from the $51 trillion it's at now.

This flurry in corporate borrowing is being driven by central banks around the world. For close to a decade, they have kept interest rates near zero (or even below) to encourage companies to pile on debt. Here in the United States, for example, interest rates have been near 0% since 2008 up until December 2015, when the U.S. Federal Reserve raised rates a meager 0.25 to 0.50 basis points.

This credit-fueled growth, while it has helped push the markets to new highs, isn't sustainable.

And if it keeps growing as S&P predicts, it could lead to a financial collapse that will rival the 2008 housing market crash.

How This Corporate Debt Bubble Could Pop Like It's 2008

Think back to 2006. The housing market was thriving, and home prices peaked. New homes were fetching an average price of more than $300,000 (compared to $150,000 just a decade before), and Americans were eagerly buying them up.

But more home sales led to riskier mortgage lending practices to low-income families (so-called subprime mortgages). Eventually, too many Americans were defaulting on their home loans which, along with other dicey bank-lending practices, ignited a chain reaction that ultimately caused big banks to fail.

With mortgages dried up, the housing market subsequently collapsed, and the Case-Shiller Home Index signaled its largest price drop in its history.

We then entered the worst recession since the Great Depression.

What's more - S&P estimates that two out of five corporations are highly leveraged (meaning they've taken on too much debt). About 43% to 47% of corporations globally are at a financial risk level. [Editor's Note: A Fed rate hike will absolutely doom these zombie companies.]

When central banks finally decide to raise interest rates, the interest rates on corporate debt will increase. That'll make it even harder for corporations to pay off their huge debt levels. And if they don't pay up, banks will suffer and will start closing their doors like Lehman Brothers did in 2008.

That'll be the catalyst that finally causes our corporate debt bubble to pop -- and take the global economy down with it.

So, the markets keep going up...

And as a savvy investor, you know not to work against the tide, but to use it to your favor.

Here are some of the best profit-making opportunities to take advantage of current market conditions.