The beautiful, post-Brexit "Blue Light Special" on equities has been great news for every buyer – especially those who grabbed SPDR Gold Shares, which has gone as high as $131.15 this month.

The sale was really great, though, because it was followed by a monster rally that saw the major indexes hit highs.

However… like all good things, the market sale has most definitely come to an end.

If you had a chance to participate in some of these gains, congratulations – and get ready for more. On the other hand, if you missed out on any of it, don't worry…

Gold Is Good… but Silver Is Doing Better

The post-Brexit chaos sent gold on a rocket ride, but the often-overlooked correlated "white metal," silver, actually had a longer and, percentage-wise, higher ride, peaking at $19.39 on July 13.

Stocks have largely behaved the same way, of course, but that's not a bullish sign for gold and silver. We're experiencing a "breather" right now – in stocks and, to a degree, metals – that could become a full-scale swoon before the next move higher.

But before I get you set up for that move, let me show you what has gone on with both silver and gold by looking at the gains they've made since their December 2015 lows. 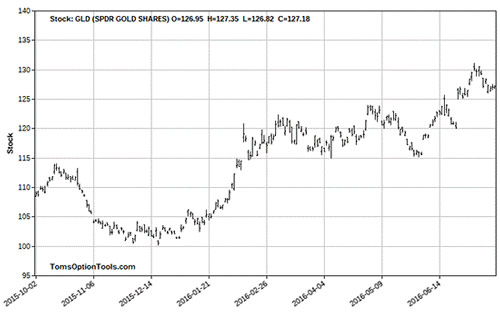 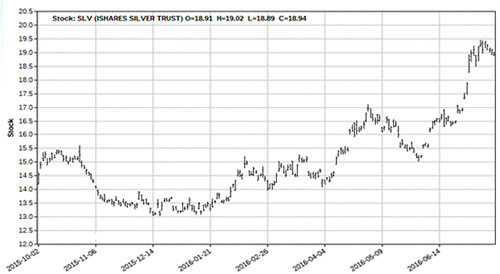 Silver is much lower in price. That has much to do with its higher percentage gains when, truthfully, it correlates pretty well with gold most of the time.

While gold has some industrial uses, silver is far more widely used as an industrial metal, and for an increasing variety of uses, too.

For traders' purposes, that means it's not just being mined to sock away in vaults awaiting a rainy day apocalypse. Silver is being used more, so it's a bit more scarce than gold.

And as we know, both silver and gold are investment vehicles, assets. But if we ever come face to face with another recession, foreign central banks will focus almost exclusively on gold.

This makes silver somewhat more sensitive to the global economy, and it's one of the reasons why it's more volatile than gold.

But during times of global economic weakness, real or perceived, we just might see silver decouple from gold and begin to outperform it once again.

What Silver Needs to Do to Double Your Money

When using my proprietary Money Calendar tools and looking at the green on the screen for SLV, I see the potential for a slight bounce higher in price of about two-and-a-half points over the next 30 days. 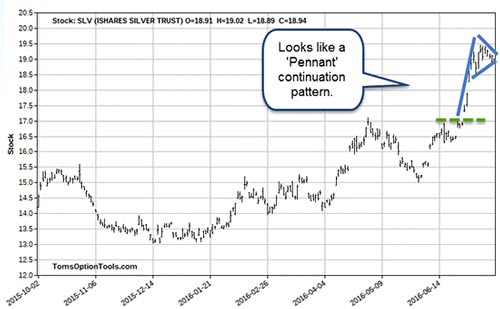 Look at the technical pattern on SLV, and you can make a case for this recent formation being a pennant. A pennant is another type of continuation pattern, similar to the ones we discussed last week.

Isn't it uncanny that Money Calendar also shows about a two-and-a-half-point move over this time frame?

These aren't necessarily trading recommendations, but you'll get a good idea of the trades that need the smallest move in order to double in value – in both cases, SLV needs to move 8.28% for you to make at least 100%.

To make the most profit from this kind of move, consider buying-to-open four $18.50 calls and six $19 calls, risking no more than $500 per trade, maximum. Since both "legs" need roughly the same price move (as a percentage) in the underlying stock, you stand to take in more profits if you manage your trades this way.

Tom's Making a Bet… You'll Want to Get "In": It's the most outrageous guarantee ever. Tom Gentile just committed to giving anyone prepared to follow along 20 opportunities to double your money by Dec. 31, 2016. And he's placing a $1 million wager today to prove it. See exactly what Tom has in the works right here…

I want to learn how to trade like Tom

I'm a novice at options. I need all the help I can get

I new to all of this its alot to take in ,thank you for your patience and expertise