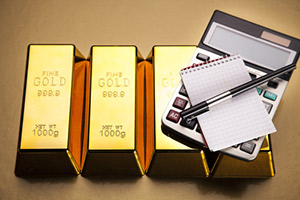 But that's just the start of gold's rally...

In fact, our Money Morning experts recommend buying gold today because we see gains as high as 278% for the precious metal by 2020.

Editor's Note: Looking for the best gold exchange-traded funds to buy this year? Find all five of our picks in our new gold investing guide.

Before we reveal our gold price prediction, here's why the price of gold is rallying this year...

Why Investors Have Been Buying Gold in 2016

While these four factors have driven gold prices higher, there are two more that will keep the rally going.

Here are the two most bullish reasons why gold prices will rally 278% in the next three and a half years...

Reason for Buying Gold No. 1: Low Interest Rates in the United States. The U.S. Federal Reserve's lower-for-longer interest rate stance has been a key gold price catalyst. When the Fed initiated its first interest rate hike in nearly a decade last December, policymakers penciled in four interest rate hikes for 2016. As the year unfolded, the Fed trimmed that number to two. Now, traders are placing greater odds on an interest rate cut before the next rate hike.

Reason for Buying Gold No. 2: Rising Consumer Demand. Retail interest in gold bullion has been steadily rising. The U.S. Mint reported sales of the one-ounce American Buffalo gold coins hit 112,500 during the first half of 2016. That's a big jump from 96,500 during the same period in 2015. Not to mention demand in Asian countries has also been surging in recent years. India beat China last year as the world's largest buyer of physical gold, importing over 1,000 metric tons. That's an 11% increase from 900 in 2014.

The gold price rally has settled in the last couple of weeks as investors have steered back into stocks, which sent U.S. markets to record highs. Gold market action will be guarded today and tomorrow as traders await a decision from the Fed on interest rates.

Yet there is nothing guarded about Money Morning Resource Specialist Peter Krauth's latest gold prediction. Krauth sees the price of gold hitting $5,000 an ounce by 2020.

That means buying gold now will yield gains of 278% over the next three-and-a-half years.

Marijuana stocks have been ignored by investors for years.

But that's all starting to change as the marijuana market grows into a $7.1 billion industry. And that's just the beginning.