Investors could get a chance to pick up Apple stock at a bargain after the company reports its 2016 Q3 earnings today (Tuesday) after the market close.
In recent years the June quarter has been Apple Inc.'s (Nasdaq: AAPL) worst. That's because the company times most new products to the fall to exploit the holiday shopping season. That's particularly true for new versions of the iPhone.

In addition, this quarter's earnings will fall short of what Apple did in the same quarter a year ago. It will mark the second straight quarter of year-over-year declines after an incredible run of 51 straight quarters of growth. 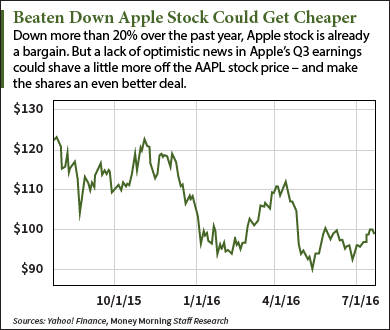 While the year-over-year decline is expected, the negative trend will weigh on Apple stock. Any surprise to the upside would have to be significant – at least in the 4% to 5% range – to have any hope of moving AAPL stock up in the wake of the Q3 earnings report.

And an earnings miss could knock as much as 7% to 8% off the Apple stock price. That would put AAPL stock back in the low $90s, where it has dipped twice in the past three months.

Here's why that would be an attractive entry point for investors…

Why Apple Stock Is a Buy After Q3 Earnings

Apple stock is already pretty beaten down and unlikely to fall much below $90. Next year growth is expected to resume, with full-year EPS rising from this year's estimated $8.22 to $8.85 in fiscal year 2017.

Frankly, even the current AAPL stock price of just under $100 is pretty appealing, given its prolonged slump. AAPL shares are down more than 6% year to date and more than 20% over the past 12 months.

And unless the iPhone 7, due to be unveiled in September, has some extraordinarily compelling features to drive upgrades, Apple stock is destined to go sideways for the next six to 12 months.

As for the meat of the Apple 2016 Q3 earnings report, here's what investors should keep an eye on…

First of all, here's a quick look at the FactSet consensus forecasts for Apple's key businesses and how they compare to sales in the same quarter last year:

Note that the only segment showing growth is iTunes software and services, which includes such things as Apple Music and the App Store. Expect this segment to continue to play a more important role in Apple's earnings in the future.

Read More: One way Apple could boost growth overnight is with a splashy acquisition. These three household names are at the top of Apple's shopping list…

Other things to watch in the AAPL Q3 earnings:

Gross Margins: This is the first full quarter to include sales of the lower-cost iPhone SE, launched in late March. But analysts are worried the cheaper product will eat into Apple's margins, something Wall Street will be looking for in the Q3 earnings.

China: Sales of the iPhone in China have played a big part in boosting sales and profits over the past several years. But a Counterpoint Research report earlier this month said that Apple had slipped to fifth place in the Chinese market. Rest assured any comments by CEO Tim Cook on China in the conference call will be thoroughly dissected.

India: One possible source of positive news in the Apple Q3 earnings could be on India. Bloomberg recently reported that India will grant Apple a three-year exemption from a law requiring stores there to source 30% of their products domestically. That would open the door for Apple to open retail stores in India, which could bolster sales there significantly.

Apple Watch: Sooner or later, Apple is bound to break out sales of the Apple Watch instead of hiding the product's performance in the "Other Products" category. Will this be the quarter?

As gloomy as the Apple Q3 earnings may appear, investors need to stay focused on the long term when it comes to this company. Here's why…

Even if the iPhone 7 isn't a blockbuster, the version due in 2017 definitely will be. It's the 10th anniversary of the first iPhone's debut, and it is believed Apple is making every effort to make it an extra-special, "gotta-have-it" device.

Beyond that, the Apple ecosystem's expansion into new services has given the company new ways to monetize the hundreds of millions of users with iTunes Store accounts.

And further down the road Apple is likely to use its innovative prowess to jump into new businesses, such as self-driving cars and virtual reality.

That's why the one-year price target on Apple stock is $120.96, even with all the company's troubles this year.

And it's not hard to see how AAPL stock gets even higher. The EPS estimate for fiscal-year 2018 is $9.51. Assuming the price/earnings ratio can climb from its crazy-low level of 11 now just to 15, that gives us a two-year Apple stock price target of $142.65.

Up Next: How to Boost Your Annual Returns with This Overlooked Investment