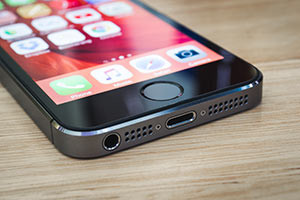 The Apple stock price is soaring today (Wednesday), up 8% to $104.35 in morning trading after an earnings beat. That puts the AAPL stock price on track for its best day in more than two years.

Before we get to our Apple stock price outlook, here's a look at Apple Inc.'s (Nasdaq: AAPL) results for the quarter ended June 25.

While those were both beats, they were down sharply from last year's figures of $1.85 per share on $49.61 billion in revenue.

Still, Apple turned in an impressive quarter in what is traditionally a week one. Apple was expected to report its second consecutive quarter of year-over-year (YOY) revenue declines. Last quarter, Apple saw its first YOY quarterly sales drop since 2003.

Soft iPhone sales caused the drop last quarter. It also broke an eight-year run of growing iPhone sales. But that was not the case this quarter.

Apple shipped 40.4 million iPhones in its fiscal Q3, above the 40.02 million analysts expected.

Boosting sales was the launch of the iPhone SE launch in March. The phone has a price tag of $399 for the 16GB model, which is much lower than a traditional iPhone debut. Analysts were worried that the iPhone SE was more basic than other new iPhones and that it might chip away at higher-end model sales.

CEO Tim Cook said the phone was well received in emerging and developed markets. He noted the iPhone SE is attractive to customers who love a four-inch phone.

People are also changing carriers frequently. According to Cook, the percentage of phone sales to people switching carriers was its highest in company history.

Analysts surveyed by FactSet think Apple sold 40 million iPhones this quarter. That drives total sales to roughly 988 million by the end of June. They estimated Apple sold 43 million iPhones during the current quarter, or roughly 500,000 per day. By their estimates, Apple crossed the 1 billion iPhone milestone on Monday. Apple introduced the iconic smartphone on June 29, 2007.

The iPad posted its first revenue growth in 10 quarters. More than half of iPad Pro sales were made by businesses. IPad shipments totaled 10 million in the quarter versus the 9.14 million expected.

Another bright spot was Apple's services division. Revenue in the space generated $23 billion over the last 12 months. Cook told The Wall Street Journal he expects the services business next year will generate enough revenue that it would be a Fortune 100 company if it was an independent company.

Looking ahead, Apple is projecting it will earn $45.5 billion to $44.75 billion in revenue next quarter. StreetAccount consensus estimates had projected $45.94 billion.

What's Next for the Apple Stock Price in 2016