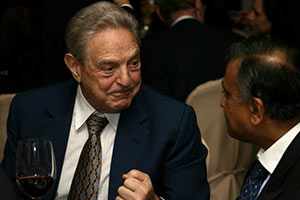 Liberal hedge fund billionaire George Soros largely disappeared from the U.S. political circuit 12 years ago. That was after he spent an unprecedented $24 million on John Kerry's presidential bid.

It seems the Hungarian-born super-financier might have been disenchanted that his motto "if I spend enough, I will make it right" didn't materialize.

But now he's back. And with three-and-a-half months left to go in the 2016 presidential election, he's already topped his previous political contribution record with $27 million spent.

This time, however, Soros is using a different approach…

One that has already proven much more effective.

The "GOP bogeyman" isn't shelling out cash to the liberal and Democrat politicians directly; he's sprinkling his money all over their supporter bases instead.

Soros' new stratagem has had a shattering effect on the Republican agenda — and on GOP nominee Donald Trump's campaign. Here's how…

You see, George Soros isn't just intent on getting Democratic nominee Hillary Clinton into the White House. Sure, he coughed up $7 million to Clinton super PAC Priorities USA Action in December 2015, according to FEC filings. And sure, this contribution made Priorities USA the biggest recipient of Soros' political bounty this cycle.

Editor's Note: Not sure what a super PAC actually is? Here's everything you need to know…

But Soros is more focused on making sure Trump doesn't get into the White House.

In order to make that happen, he's funneling money into liberal organizations. It's a Napoleonic attack move – using smaller, spread out forces to take down a singular enemy (Trump) in lieu of attacking with one large force (which would be Clinton).

For example, Soros gave $2 million to American Bridge 21st Century, an opposition research super PAC that has been targeting Trump and other Republican candidates. In 2012, it was American Bridge that recorded Republican Senate candidate Todd Akin's infamous "legitimate rape" comment. Akin went on to lose by more than 15 percentage points to incumbent Sen. Claire McCaskill (D-MO) in a race that many media outlets had already declared Akin as the imminent winner.

The research group's latest attack against Trump came in the form of an article exposing the truth about the Trump Tower's construction: It was made with concrete, not Pennsylvania steel, to save money. The effort was to anger workers in the decaying steel sector, to whom Trump promised a tenfold return of work in early July.

Soros also committed $3 million to the super PAC Immigrant Voters Win this past March. The organization is devoted to increasing turnout in Hispanic areas with known low voting inclination.

On March 15, Soros told Bloomberg that the "anti-immigrant" and "anti-Muslim" rhetoric in the Republican primary should come with consequences.

Thus far, the organization has managed to reach 728,000 voters via mailings – all mainly Latinos and Asians – in Colorado, Nevada, and Florida, which are key swing states in the presidential race.

While the full impact of Soros' contributions to these committees won't be realized until after November, there is one Soros-backed organization that's already succeeded in slowing Trump's roll…

In February, civil rights group Color of Change – to which Soros donated $500,000 this cycle – collected more than 100,000 signatures on a petition before the Republican National Convention last week. The petition – decorated with a Coke ad asking readers to "Share a Coke with the KKK" — demanded that The Coca-Cola Co. (NYSE: KO), Hewlett Packard Enterprise Co. (NYSE: HPE), and several other companies withdraw their support from the convention.

On March 30, Coca-Cola announced it would not sponsor the Republican National Convention to the same level of $600,000 as it did in 2012.

And Hewlett Packard announced on May 31 that it would not contribute to the RNC at all. In the 2012 race, however, the company provided over $556,000 in cash and donations.

Up Next: The 2016 presidential election's already been bought. Here are the bidders and "dark money" contributors you can thank for that…

Read more about how George Soros uses his political largesse to manipulate the election by following Money Morning on Twitter @moneymorning and on Facebook.