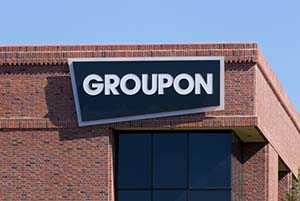 Before we get into the Groupon Inc. (Nasdaq: GRPN) stock price outlook for 2016, here's what is moving the stock today:

One of the biggest stories from the earnings report was the success of Groupon's newest market campaign. The company recently launched its first nationwide advertising campaign since 2011, which CEO Rich Williams said has been well received.

Williams also downplayed speculation that he is priming Groupon for a takeover.

Still, rumors persist that Groupon is an attractive acquisition for a successful e-commerce company.

Since then, Groupon has struggled. Even with today's bounce, shares are still down 71.26% over the last five years.

Now that we've covered what has driven the GRPN stock price rally today, here's what investors can expect from Groupon stock going forward…

What's Next for the Groupon Stock Price Now