Editor’s Note: Michael is on vacation this week, but he’s always watching the markets – particularly commodities. He’s really excited by recent developments in trading a classic, ultra-valuable mineral, and he asked us to get his recommendation out to everyone this weekend so they can make this move on Monday morning. Here’s Michael…

My grandfather was a jeweler. It should come as no surprise that I’ve always had a great love for gold and precious metals – gold and silver are a generational investment that’s especially easy to store, transfer, and pass down from parent to child.

However, up ‘till now I haven’t said much about precious stones – in particular, diamonds. That’s because there hasn’t been a really reliable way to trade them.

Diamonds are a portable and intrinsically valuable way to protect your wealth, which makes them a great “security” play for a market dominated by central bank monkeyshines in a world threatened with instability. We know they’re valuable – but the trouble is the lack of consensus on what exactly that value is. They’re more complicated than gold, with few widely accepted benchmarks, no spot price, and no standardized exchange.

Until May of this year, that is…

Diamonds just got much easier to buy – and for the first time, there’s a standardized, regulated place to do it.

Here’s my favorite way to get them… 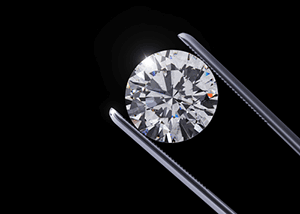 At present, diamonds are one of the very few commodities without a derivative market; there is no diamond exchange-traded fund (ETF), although the idea of one has been floating around for more than 30 years. A previous abortive attempt, the PureFunds ISE Diamond/Gemstone ETF, launched in November 2012 and shut down prematurely in January 2014. There are currently two pending initiatives with the SEC from Index IQ and GemShares, whose applications are under review; however, it's anybody's guess how long it will take these ETFs to launch. If and when they do, they will most likely buy and store one-carat round white stones, which can reasonably be seen as the "one-ounce gold eagle" of diamonds.

Part of the problem with establishing a diamond ETF, as I mentioned above, is the lack of standardization or a benchmark. Diamonds are unique, without a spot price, and prices vary from dealer to dealer. Historically, they're just not fungible.

But that's starting to change.

With the recent launch of the Singapore Diamond Investment Exchange (SDiX), the world's first fully electronic diamond exchange, accredited investors now have access to a regulated platform where they can purchase diamonds wholesale. (Unaccredited investors, hold on; there's a recommendation for you below as well.) Linus Koh, chief executive of SDiX, explains, "The exchange allows accredited investors to trade in physically settled diamonds with full price transparency in a regulated environment, for the first time." The exchange offers a unique way to build a portfolio of diamonds and is similar to using a broker (keep in mind that there are fees).

The interesting thing about SDiX is that it's making a conscious, and so far successful, effort to solve the fungibility problem. The baskets of diamonds traded on the exchange are rigorously curated, a move the founders say is intended to create liquid, benchmark products. Each basket of diamonds contains three, six, or 10 investment-grade stones (that is, falling in the top five grades of color and clarity), with a total weight of 3.1 carats/basket. Each basket comes sealed and certified by the Gemological Institute of America. Single stones are also available.

It's early days for SDiX, of course, and the exchange is just getting off the ground, with only about $1 million in trading volumes so far. However, I'm excited about it. I think it has a lot of potential, and the fact that it's setting up a standardized avenue to access diamonds (for the first time) is huge. Much like the online gold dealers I recommend (Kitco, Blanchard et. al), I like them and think you will like doing business with them.

The reason why I have such a soft spot for diamonds is a little controversial.

Sadly, today we are faced with governments that veer between gross incompetence and outright corruption that allow the rich and powerful to break the law with impunity while prosecuting the disenfranchised for thousands of victimless and often frivolous crimes that were concocted by ideologues on the right and left and their bureaucratic minions. These authorities have saddled the world with more than $200 trillion of debt and buried us in tens of thousands of pages of regulations that are steadily suffocating the economy. The former tenured economics professors at the U.S. Federal Reserve have suppressed interest rates and market volatility while printing trillions of dollars of increasingly worthless money (that may sound like an oxymoron but unfortunately it is irrefutably true) and systematically destroying the value of the dollar. Their even more clueless cousins in Europe, Japan, and China are doing the same to their economics, currencies, and societies.

All of these policies are lawless. They far exceed the limits that were originally envisioned on government.

The Federal Reserve is running so far outside the bounds of the 1913 Federal Reserve Act that it barely resembles a central bank, which is supposed to be a lender of last resort, not an uber-regulator and setter of prices. The executive branch of the U.S. government keeps expanding its powers and stealing Congress's Article I powers under the Constitution to enact ideologically driven (conservative under Bush/Cheney, liberal under Obama/Biden) policies through signing statements and executive orders that override the will of the legislature and the will of the people who legislators represent. And the Supreme Court of the United States consistently ignores the Constitution to make new laws based on the political views of the justices rather than on precedent and principle.

And that's what you have to do.

Now don't get me wrong. I'm not telling anybody to break the law. We should leave that to the real criminals – even though they are parading around as politicians, judges, central bankers, and business leaders.

But if you want to protect your family and your assets, you need to start thinking like the people who are trying to steal your freedom and your money.

In short, you need to learn to think like those criminals.

As I explained not long ago to my editing team in Baltimore, criminals really know how to protect their assets. They have to! They keep their valuables small, liquid, and easily portable. They know that paper trails are deadly and that endless red tape slows you down.

They love gold, diamonds, and cash, because when you're carrying those, it's easy to make a quick getaway.

I'm not a crook, but I appreciate that line of thinking. So:

A Recommendation for Unaccredited Investors

Accredited Investor Requirements
In order to qualify as an accredited investor, you must fulfill at least one of the following conditions:
• Have an individual income of over $200,000/year, or have a joint income of $300,000 for each of the last two years (and expect to maintain the same income level in the future)
• Have a net worth of over $1 million (either individually or together with your spouse)
• Be a director, executive officer, general partner, or a related combination thereof, for the issuer of a security that is being offered.

If you aren't an accredited investor, you can still invest in diamonds, though not through SDiX. Diamond miners, like gold miners, have done well this year – Anglo American Plc. (LON: AAL), the parent company of De Beers, is up over 179% since the beginning of the year, Petra Diamonds Ltd. (LON: PDL) is up 36%, and Alrosa (MCX: ALRS), the world's second-largest diamond miner, is up 27%. You'll notice that none of these trade on U.S. exchanges, which sadly is par for the course for diamond miners.

However, Mountain Province Diamonds Inc. (Nasdaq: MDM) is one exception – it's up 60% since the beginning of the year. For unaccredited investors, adding some MDM to your portfolio can't hurt.