Already in 2016, at least 28 ISIS terrorist attacks have killed over 1,000 people around the globe.

While most attacks occur in the Middle East, they're not limited to that region. Both Western Europe and the United States have seen their share.

According to FBI Director James Comey, ISIS terrorist attacks are only going to become more frequent and deadly...

At a cybersecurity conference on Wednesday, Comey said that "at some point, there's going to be a terrorist diaspora out of Syria like we've never seen before."

We're already seeing evidence of the vast reach and influence of ISIS. Just look at this breakdown of ISIS terrorist attacks this year: 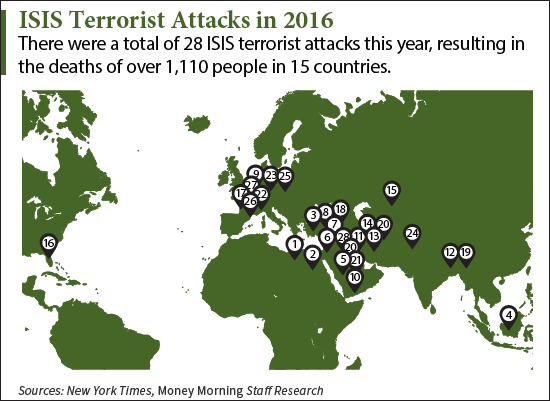 With the amount of mayhem being generated by ISIS in 2016, many investors are justifiably nervous. They want to make sure their retirement savings will be able to withstand global terror.

Our Chief Investment Strategist Keith Fitz-Gerald has a simple message for readers:

"Whatever we wish would be the case, war, terrorism, and ugliness are not going to go away any time soon. Unfortunately, all three are 'growth industries' at the moment, and that means every investor needs to understand how to navigate his or her money through a world that will be increasingly shaped by terrorism."

As an investor, you have to confront terrorism head-on if you want to safeguard and build your wealth.

You can start this process now by checking out Fitz-Gerald's guide on how terrorism affects the markets. As a bonus, he also gives away to readers one of the best terrorism-resistant stocks to buy.

Get the full report, right here...