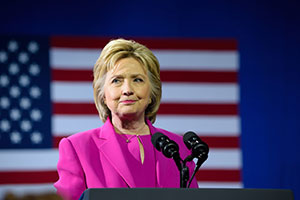 In her acceptance speech Thursday evening (July 28) at the Democratic National Convention, nominee Hillary Clinton declared, "We will not build a wall. Instead, we will build an economy where everyone who wants a good-paying job can get one."

Clinton's declaration falls squarely in line with her narrative on economics throughout this 2016 presidential race. She has held steadfast to her belief that Republican policies led to the Great Recession but thanks to President Barack Obama's leadership, the American public has dug its way out of the devastating downturn.

She's not wrong about that last part. Americans have dug their way out of the Great Recession, slowly but surely.

Don't Miss: Voters unhappy with both Donald Trump and Hillary Clinton are clamoring for a third option. They may not know it, but they already have one...

According to a Commerce Department report released on June 28, the nation is still on the economic up-and-up. Its gross domestic product, the broadest measure of goods and services produced across the economy, expanded at a seasonally adjusted annual rate of 1.1% in Q1 2016 across the majority of states (36 total).

And four of those states are swing states that Clinton will win, solely because their economies are booming.

Florida, Ohio, Pennsylvania, and Virginia - all battleground states - offer a combined 80 electoral votes in presidential elections. That's more than a quarter of the total needed to win the White House.

And each one of these states has experienced better-than-average GDP expansion since Q3 of 2015.

Just look at the stats...

But ultimately, Clinton will take PA because it has a 52% favorability rating of President Barack Obama, according to a Suffolk University poll released July 28. And most of Clinton's policy proposals, including her economic ideas, expand on the current president's programs.

It doesn't hurt that Pennsylvania has also voted blue in the last six elections.

Clinton will also win the most sought-after state in the race...

Florida: Florida is considered the most important state in a presidential election because it carries 29 electoral votes (fourth-most in the country) and its voter demographic is almost always a complete toss-up.

Editor's Note: The 2016 presidential election's already been bought. Here are the bidders and "dark money" contributors you can thank for that...

The state's GDP growth was mostly driven by gains in Florida's classic industries: real estate, construction, and retail. One might assume that real estate prosperity might hint toward a bigger Trump support base in the state than a Clinton support base.

But that just isn't the case.

Florida voters care most about jobs and the economy, the Independent Journal Review reported last September -- and Clinton knows it. Her campaign has focused on touring the Sunshine State post-convention, where's she expected to tout its bustling economy and promise to see it through to the projected $1 trillion mark by 2018 (as predicted by a University of Central Florida study released on July 28).

Trump, however, is focusing his post-convention tour on the Rust Belt states - Pennsylvania, Ohio, Michigan, Indiana, and Illinois.

Clinton's campaign manager, Robby Mook, told Politico on July 27 that this renewed focus from the former first lady will likely nab her Florida come this fall.

Ohio: The Buckeye State is a traditional bellwether for presidential elections. Its 1.4% growth rate in Q1 this year followed a 2.9% growth rate in 2015's fourth quarter.

On July 22, Moody's Analytics forecast that Clinton will win Ohio with 51.6% of the popular vote. The Moody's model has correctly forecast the result of every presidential election since 1980.

"What our model is saying is all else things being equal, the incumbent party should have an advantage right now given what is going on with the economy," said Dan White, an analyst with Moody's, according to Dispatch.com on July 26.

Virginia: Virginia used to be a Republican safe haven until 2008 and 2012, when President Obama nabbed the state two election cycles in a row.

Old Dominion is also home to Clinton's VP pick, former Virginia Gov. Tim Kaine (D-VA). All Kaine has to do is tout how the state's economy outperformed the greater United States during his time in office from 2006 to 2010 to win voters over.

Up Next: Most people remember the Bill Clinton economy as a "boom" they'd like to see again. But that's a false and dangerous myth. Read more...