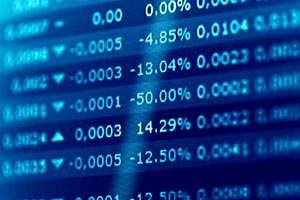 The Dow Jones Industrial Average has been in a bit of a free fall over the last week as oil prices drag down investor sentiment.

The Dow shed another 27 points today as traders eye a bottom for oil prices. But while investors were hung up on energy market headlines, a number of big stories slipped under the radar. That includes several profit opportunities that are shaping up nicely for investors.

The Dow Jones slumped for the sixth straight day as energy stocks and oil prices pulled down the markets.

The Nasdaq continued to rise thanks to ever-increasing optimism in the technology sector. But with oil prices falling, the world's largest producers watched their share prices fall. Shares of Chevron Corp. (NYSE: CVX) and Exxon Mobil Corp. (NYSE: XOM) were both off more than 3.4% on the day.

European banks drew a lot of attention today after the European Central Bank released the results of its latest round of stress tests. The ECB said that most firms like Deutsche Bank AG (NYSE: DB), Royal Bank of Scotland Group Plc. (NYSE: RBS), and Barclays Plc. (NYSE ADR: BCS) were healthy. However, the central bank did raise concerns about declining capital ratios at RBS.

The report is positive for the European banking sector. But the leaders of the European Central Bank all have their heads in the sand. Structural problems continue to plague the health of the global financial sector. And Money Morning Global Credit Strategist Michael Lewitt argues that one specific bank could bring the European financial sector to its knees. Here are Lewitt's latest projections for the bank that could – by itself – cause a massive super crash of the global economy.

Silver prices continued to rally today, while palladium prices hit a 13-month high. Gold continues to rally and has now topped $1,360 per ounce. With so many geopolitical problems plaguing the global economies, now is an ideal time to own precious metals. Money Morning Resource Investing Specialist Peter Krauth has just updated his silver price forecast for 2016. Check it out, right here.

Oil prices dipped again on Monday, with WTI crude prices hovering around $40 per barrel. WTI crude prices were off 3.8% today, while Brent crude added 3.1%. Traders continue to worry about a global supply glut, and short selling has accelerated in the market.

On the deal front, shares of Transocean Ltd. (NYSE: RIG) fell more than 6.5% after the firm agreed to purchase the remaining shares of its master limited Transocean Partners (NYSE: RIGP). The deal is valued at a little more than $510 million. RIGP shares rallied more than 9.5%.