Last week, I highlighted for you how the silver price was outpacing the gold price, despite the latter's strong gains.

Well, that trend has continued to progress over the last five trading days.

The price of silver has headed higher over the past week, thanks to both the Fed and action in the U.S. dollar.

The silver market is showing signs of strength and resilience, even in the face of more prominent extremes in certain indicators.

That still has me cautious for the near-term silver price outlook. We remain in what's usually the most challenging season for this metal. Still, that's not to say we can't experience returns outside the norm, so we need to be prepared for any scenario.

Let's be clear, silver prices are in a veritable bull market, and I don't see anything that's about to change that.

But like gold prices, there are forces that either support or weigh on silver at any given time. The most prominent force is the dollar, which is why we're going to look at two factors besides the Fed that affected the greenback last week.

Let's look at what's been shaping the price of silver lately, as well as where it might be headed in 2016...

On Tuesday, July 26, the silver price ticked slightly higher. It traded flat throughout the day and closed at $19.58 for a 0.4% gain.

But Wednesday saw the most action, courtesy of the U.S. Federal Reserve...

The central bank unsurprisingly announced it would keep interest rates unchanged. Fed Chair Janet Yellen said the economy was stabilizing and global risks had diminished. The decision pulled the U.S. Dollar Index (DXY) 100 basis points lower between the time of the announcement and Thursday morning.

As expected, silver prices shot higher on Wednesday. They surged 3.8% to close the session at a seven-session high of $20.32.

This chart shows what that silver price action looked like... 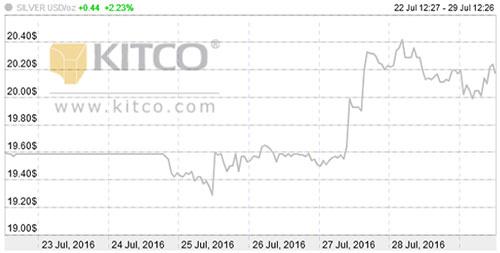 Meanwhile, here's how the dollar responded to the news... 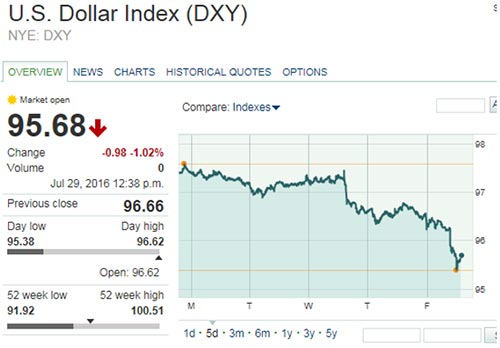 Don't Miss This: Silver is universally regarded as one of the best long-term investments. That's why we made this guide to help you profit from the precious metal this year...

But the price of silver rebounded on Friday as the dollar continued to decline. From Wednesday to Friday, the DXY lost nearly 200 basis points. This boosted the silver price 1.2% on Friday to settle at $20.35. With that, silver saw a weekly gain of 3.4%.

Although the Fed's decision not to hike interest rates was the biggest force, two other factors weighed on the dollar last week.

Here's what you need to know about these two factors, one of which could have a bullish effect on silver prices in the second half of 2016...

The first factor was the U.S. GDP numbers released on Friday, which widely missed estimates.

GDP grew only 1.2% in the second quarter, far below the 2.6% estimate. That slow growth likely weighed further on the DXY as the market factored yet more delays in Fed interest rate hikes.

The second big factor was the Bank of Japan's decision to keep interest rates unchanged. Markets had been expecting Japan to unleash its version of "helicopter money." That pushed the Japanese yen higher versus the dollar, also contributing to support for the silver price.

If we make a point of comparing the recent performances of silver prices with gold prices, we see the former quickly catching up to the latter. 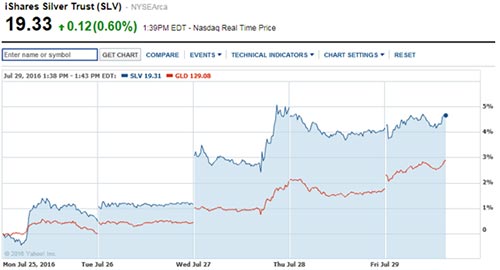 As you can see, the two metals started Monday with the price of silver outperforming the price of gold by mid-day. That gap widened on Wednesday with the weaker DXY. By Friday, silver had managed to outpace gold's gains considerably on the week.

If we look at the last three months, we can see how silver's outperformance really kicked into high gear in June... 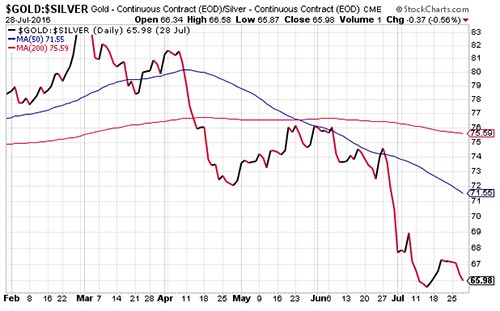 Another reason for the recent silver price rally relative to gold is trading activity...

According to the Commitments of Traders (COT) report for the week ending July 19, money managers have been reducing exposure to gold futures. At the same time, they've been upping their silver bets.

Gross long positions in silver were up nearly 6,000 contracts to reach a new net long silver position at 91.152 contracts. That's a record level of speculative interest, which also suggests a higher risk in the very near term for silver prices.

Of course, I've been telling you for a while that silver was at risk of correcting. That hasn't been the case yet.

But coupled with the seasonal headwinds for precious metals until summer ends, I'd be careful not to rule that out.

Next Up: Here's What Nobody Gets About the Media's "Oil Glut" Mantra